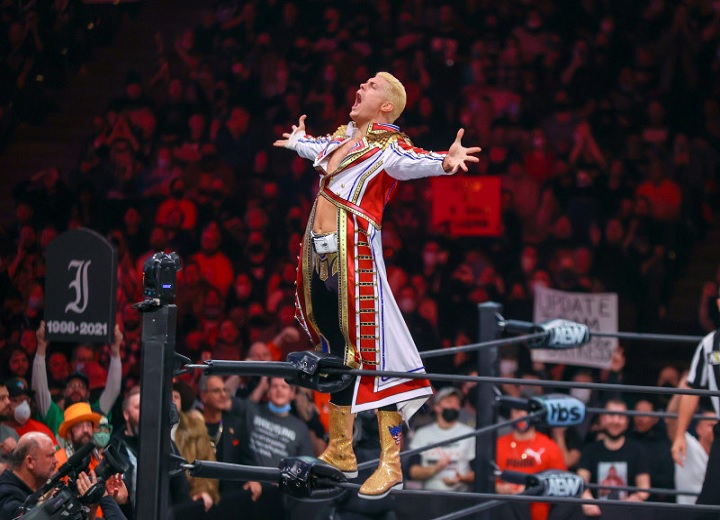 When fans speculated about who would be the first Superstar to swim against the strong current and leave All Elite Wrestling for WWE, Cody Rhodes was so distant a thought, so unlikely, that most probably didn’t bother putting his name on the list.

That’s still stuck in the land of speculation now for now. AEW President Tony Khan recently announced that Cody and Brandi Rhodes were leaving the company, and Cody released a statement of his own. According to Ariel Helwani of MMA Fighting, Rhodes has talked with WWE about a return.

Prerequisites out of the way, it’s easy to hand-wave this sort of move as a major win for WWE. And it is—WWE had drastically bled talent to AEW, ranging from modern legends like Bryan Danielson to guys finally getting to spread their creative wings like Malakai Black, to name but two. It was also AEW, not WWE, that lured CM Punk out of his seven-year hiatus. But the line of thought that says it’s great for WWE would also seem to imply that it’s bad for AEW.

It’s awkward losing an executive vice president who helped establish the promotion. But it’s also hardly surprising. After some stunning feuds and moments (remember the 10 lashings?) in AEW’s infancy, Cody’s momentum sputtered, and a hiatus didn’t help. He was either unwilling or unable to go heel, and by making good on a stipulation that he would never challenge for the company’s top title, he started to lose ground with fans.

Speculation about why Cody wouldn’t change up his character aside (the Cena-ish vibes and non-wrestling stuff sticks out), he just wasn’t generating reactions in the same way another guy who has been there from the beginning like, say, Chris Jericho still does. Doing things like going through a flaming table and such stuck out in a weird way, not an endearing one. That Brandi didn’t seem to be winning over fans either probably didn’t help matters.