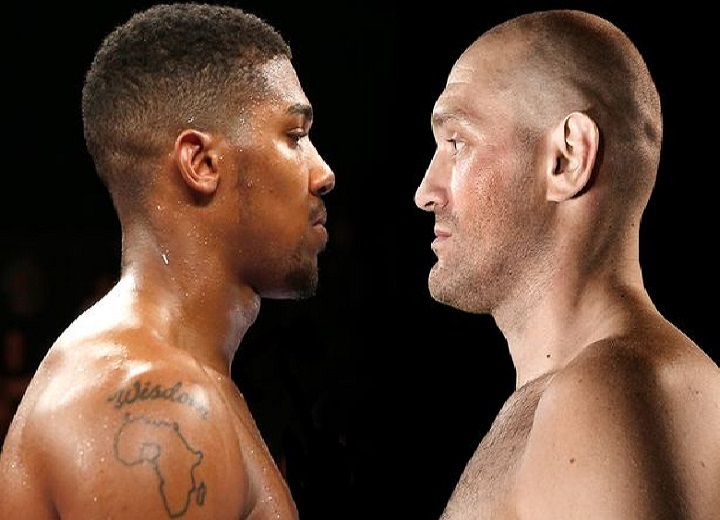 What better place for a super-fight announcement than in the ring immediately after another super-fight – and it sounds like that is what Eddie Hearn could be planning for Tyson Fury vs Anthony Joshua.

The Match-room supremo is working feverishly to finalize a date and venue for the world heavyweight title unification match.

Saudi Arabia is expected to host in early August – paying a reported site fee of $150million. “The biggest in boxing history” per Hearn.

And he says it would be “wonderful” to make an announcement in the ring immediately following the ‘Canelo’ Alvarez vs Billy Joe Saunders showdown in Texas on Saturday night.

This would make sense for Hearn given he is apparently set to go all in with Saturday’s broadcaster DAZN in the UK from July 1. He already has an eight-year deal with the self-styled ‘Netflix of sports’ in the United States.

He told the DAZN Boxing Show: “I can’t speak on behalf of Tyson Fury, but even speaking on behalf of him I don’t think anything’s in jeopardy.

“We received the offer from the site on Friday night and we are reviewing that with the teams. There are three different sets of lawyers on this, from the fight in terms of the promotion.

“Everyone’s moving as fast as they can, nothing is in jeopardy. In an ideal world I’d love to be in the ring with you guys on Saturday after the Canelo fight, so we’ll see if that’s possible.”

Fury vs Joshua is expected to take place in a 20,000-seat indoor venue in the Saudi Arabian city of Jeddah. The possible dates are July 24, July 31 or August 7 – though with time moving on quickly the latter appears more likely right now.

Before that we can ‘Canelo’ vs Saunders, and possibly that huge announcement. What better way? In front of 70,000 fans in AT&T Stadium and a worldwide audience on DAZN. Bring it on…