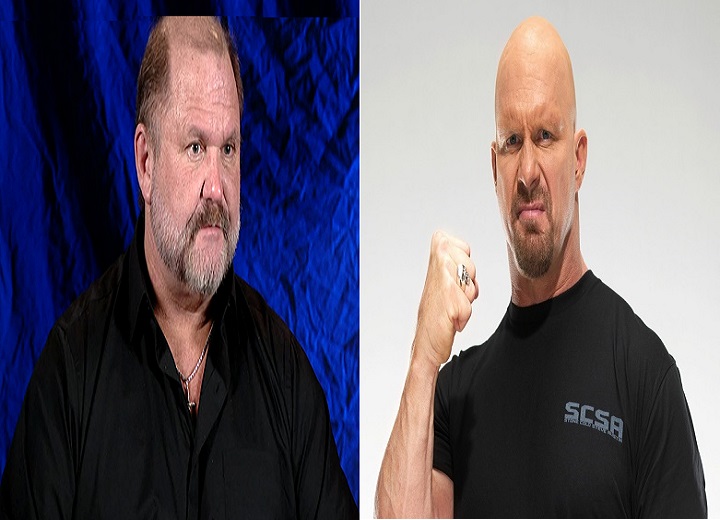 From enforcing for the Four Horsemen to coaching Cody Rhodes, Arn Anderson’s career has taken him to many different places.

While Anderson’s in-ring tenure was short-lived in WWE, he worked for Vince McMahon’s promotion for nearly two decades as a road agent.

Despite primarily working backstage, Anderson made a few on-screen appearances. Anderson interfered in Ric Flair’s WrestleMania X8 contest against The Undertaker, delivering his patented spinebuster to the Phenom.

The Enforcer would continue to assist his old stablemate and regularly helped Flair during his feud with ‘Stone Cold’ Steve Austin.

The Texas Rattlesnake eventually got one over on Anderson when Austin urinated on him on an episode of RAW. Speaking on The Arn Show, Anderson revealed there were a few people who tried to get the controversial angle turned down but were unsuccessful.

“Two people that were heavily involved in it was Jack Lanza, who was the backstage producer, and Austin, himself,” Anderson said. “They both told me that they went to Vince individually and collectively, and said, ‘This guy’s really highly respected in the business with the boys and the audience as well. This is really demanding. Can we do something else?’ Both got turned down, flatly.

“Do I suspect foul play and a reason in his mind to be doing it? Yes. Will it be very easy for his case to be, ‘Well, we don’t want to do it to Ric.’ It’s the same thing as if you went out, put Austin over, and got him ready for Ric the next big pay-per-view.

You put him over clean in the middle. Same concept, just a different way to do it. To go about it would be his argument; it could be punishment for leaving the way I did in ’89.”

It’s no secret that many WCW stars were not treated with the respect fans felt they deserved upon joining the WWE. From The Rock “not knowing” who Booker T was on an episode of SmackDown all the way until recently when Sting lost his first match in World Wrestling Entertainment, wrestlers who made their names on Monday Nitro were often slighted on WWE programming.

The urination angle came well over a decade after The Enforcer departed the then-WWF to return to WCW in 1989. Anderson did not say whether or not he believes the storyline was punishment, but he says he wouldn’t put it past McMahon.

“He waits a long time,” Anderson said. “When he feels betrayed, he feels like you wronged him. And we were the very first guys to put our notice in during that era. I know he didn’t like it, and you couple that with some other things.

But do I think that’s a possibility? Yep, I know that he waits a very, very long time if he feels like you have screwed him. I could possibly see that. It was just so degrading and demeaning if you looked at it on the outside in.

“I’m a guy that– hey, do you know what popped up in my head when they first told me about wanting Austin to pee on you? My wife and kids. Their picture popped up right in my head, but that’s the reason I did it. I did it smiling because those are the people I’m responsible for.

People may think that’s not true, but everything I’ve done in this business, every sacrifice I made, every time I had guy come to me that I respect and go, ‘Don’t do that, you’re Arn Anderson. You don’t have to do that, just tell them no!’

I went ahead and did whatever was requested to take care of my family. That’s my first responsibility on this earth, and hopefully I will be able to see it through and make sure I keep taking care of them for a while. I honestly believe that could have happened because it was just so personal.”

Whether or not the angle was punishment, it’s not uncommon for WWE Superstars to receive on-screen humiliation for outside of the ring antics. Anderson says uncomfortable storyline events are commonplace in McMahon’s WWE, and if you want to keep your job, it’s best to just agree.

“Well, he knows. I mean, it’s not even a question in his mind,” Anderson said. “Anything that he comes up with that is his idea that he wants to do for whatever reason, you can say no and find other employment.

If you don’t say yes and do it with a smile, you may do it, but do it with your teeth gritted, he’s going to know that, and then it’s like you didn’t even do it at all. Punishment’s going to be the same.

You want some blind obedience in all of his requests, and he doesn’t want you to have your own opinion unless it runs parallel to his.

“So, there was not a big argument. I know that Jack and Austin went individually and collectively. It’s one of those that goes over the line. I think there were more people hurt and pissed off about it than I was because it’s the wrestling business.

Sometimes, things are vert degrading, but I think the audience is smart enough to know he really didn’t pee on me, although it looked the part. I think the people that know me know that I’ve always just went along to get along, and that was just another case of it.

Anybody that doesn’t call me a team player or that I’m selfish might want to look at that as a pretty good example of what kind of businessman I am.”