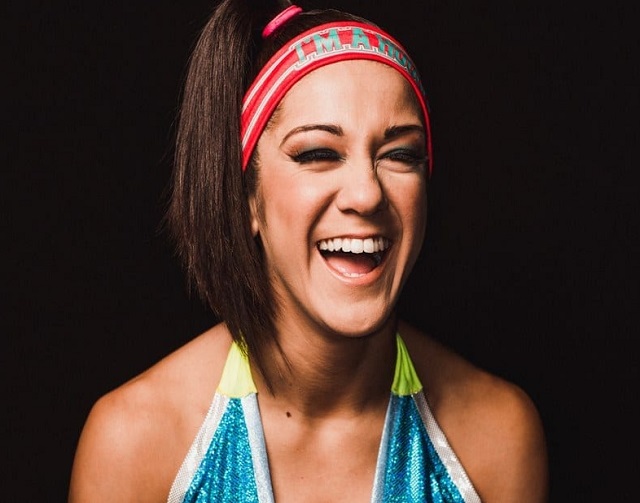 Who is WWE Star Bayley currently dating? One of the greatest fascinations for the WWE Universe is the dating lives of the superstars that they watch on a week to week basis, and in particular, the women’s dating lives.

Anyone who has ever read an interview with Bayley probably knows that the Hardy Boyz and Lita were her primary obsession when she was a teen.

She even told us about how she would make herself the third Hardy Boy in WWE video games back in the day.

So please enjoy her tale of a meeting with Matt Hardy at age 15, and how it caused a foolish boy to dump her.

“I was 15 here. This was 2005, and it was my first time meeting him. And I’ve told this story to a few people, but … really embarrassing.

“I had a boyfriend at this time, that I met in like summer school. And then this [Matt Hardy photo] happened, and I swear that’s all I could talk about. ‘He did this, and then he did this in his match, and he gave me a hug, look at all these pictures.’

I was posting it all over like MySpace and stuff. I literally think the reason this guy broke up with me is because I couldn’t stop talking about this. I don’t know if he was jealous or if he was just like, ‘This chick is weird.’ Maybe a combo of both.

“But Matt Hardy ended my relationship. So, whatever man.”

Teenage boys are dumb, man. But thank goodness for Bayley never being ashamed to tell her tales of geekdom.

Fast forward, many stars, both those in wrestling and elsewhere have wanted to date Bayley over the years and this has given room for much speculations and rumours as touching who the 30 years WWE woman wrestler is dating and having a nice time with.

Everyone’s favorite huggable WWE superstar and Raw Women’s Champion Bayley is engaged to Aaron Solow, a fellow professional wrestler. Pamela Rose Martinez, whose in-ring name is Bayley, met Aaron Solow while they were both training together in California. They are now engaged to be married, though no information about the wedding has yet been announced.

Here’s what you need to know about Bayley’s fiancé Aaron Solow.

1. He Is a Wrestler Who Performs on the Independent Circuit

Like his fiancée, Aaron Solow is a professional wrestler, and he has performed with a variety of independent promos.

One of those is WrestleCircus, a promotion based in Austin, Texas. With WrestleCircus, Solow has performed with fellow wrestler Ricky Starks in a tag team called Extra Talent-Ed. WrestleCircus recently put on a show at South by Southwest 2017.

Solow has also performed with Laredo Wrestling Alliance, and he is a former tag team champion with Anarchy Championship Wrestling; these are both Texas-based wrestling promotions.

Bayley and her boyfriend Aaron Solow getting married soon

Bayley and Aaron Solow met while they were both training with Jason Styles in California. Solow said on Twitter that he trained with Styles for three years, and Bayley trained with him for four years.

Before coming to the WWE, Bayley performed with independent promotions like Big Time Wrestling, NWA Championship Wrestling, and Shine Wrestling.

2. He Was an Alternate During the Cruiserweight Classic

In 2016, the WWE held the Cruiserweight Classic, a competition for performers who weigh 205 pounds or less.

Thirty-two athletes were selected for the Cruiserweight Classic, but because injuries are so common in wrestling, the WWE needed to have alternates in case someone was hurt and had to leave the competition. Aaron Solow was one of those alternates.

“To even be considered to be a part of this means a lot,” he told WWE.com. “There are thousands of guys that want to be in the CWC. Even though I’m not in the tournament, just to be around it and see how it’s put together, and how WWE is treating these outsiders with so much respect is very, very cool.”

Outside of the Cruiserweight Classic, Aaron Solow has also worked with the WWE when he has performed with NXT, the WWE’s developmental division. Recently, Solow performed in a dark match at NXT Takeover: San Antonio. This was a squash match in which Solow was easily defeated by Wolfgang.

And although Aaron Solow was not chosen to participate in the Cruiserweight Classic, in February, he made his debut on 205 Live, the WWE Network show dedicated to the cruiserweight division.

In his debut match, Solow was defeated by Akira Tozawa; this was also Akira Tozawa’s 205 Live debut. At the time, Bayley chimed in on Twitter to congratulate her fiancé on his debut.

The majority of WWE fans know Aaron Solow primarily as Bayley’s boyfriend, and it seems that he is not a fan of that fact.

At least, that’s the position he took in a promo he cut in 2015. He created this video as an audition for Tough Enough, the WWE competition show that was that year entering its sixth season.

In the video, Solow says that he has relocated three times in six years all in an attempt to get noticed by the WWE.

“I’ve been noticed as Bayley’s boyfriend,” he said. “See, I don’t wrestle every weekend and sacrifice my body just to have people yell out, ‘I’m a hugger.’ That’s why I need to be on WWE Tough Enough. I need to prove to everyone out there…that I’m more than just Bayley’s boyfriend.”

Solow did not end up getting picked for Tough Enough.

In November 2016, Bayley got engaged to Aaron Solow.

At least, that’s what was reported in professional wrestling news outlets like SE Scoops and Sportskeeda. Neither Bayley nor Aaron Solow ever actually announced the engagement, and they have never confirmed the news since.

Solow and Bayley frequently interact on Twitter, responding to one another with memes and image macros; Bayley on several occasions has mocked Solow for his “dad tweets.”

Aaron and Bayley have a dog, Flex, who is a staple of both of their Instagram accounts.

Bayley is neither married nor single. Currently, she engaged to her boyfriend Aaron Solow, a professional wrestler who performs for the Independent Circuit. They are in an affair from a long period of time.

The couple first met each other while attending wrestling classes in California in 2010 and were engaged in November 2016. A native of San Fransisco, California, Aaron Solow, is a professional wrestler who became a member of the WWE and the ACW. Born on February 4, 1987, he is 32 years old and is also trained in Crossfit.

They both are loyal to each other. According to sources, very soon they are going to celebrate their marriage.

Who is Bayley father?

Born to Mexican parents, her parents were her inspiration to get into wrestling during her childhood. Her mother is Ann B. and the information regarding her father is yet to be revealed.

Does Bayley have siblings?