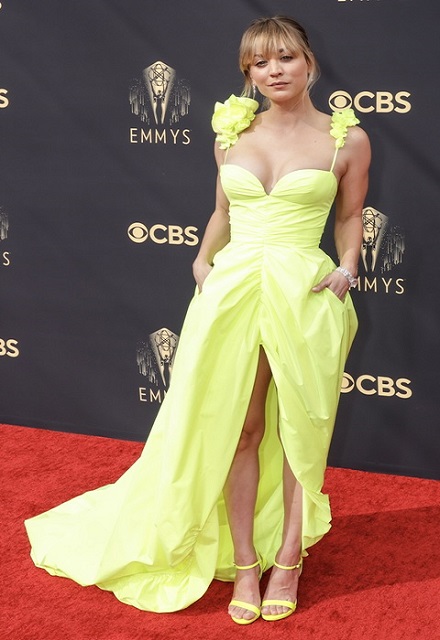 The Flight Attendant actress, Kaley Cuoco always knows how to bring the funny. 😂

In the age of social media, it’s pretty common for celebrities to be give fans a glimpse of their behind-the-scenes lives. The Flight Attendant star Kaley Cuocois no exception and her team has also been part of the fun too.

Kaley’s close friend Brad Goreski shared a few TikTok videos of The Big Bang Theory actress getting glammed up for a red carpet event. While it initially looked like Kaley wasn’t into him teasing her for all of his social media followers, she eventually started playing along. In fact, when Brad posted a second TikTok a short while later, the 8 Simple Rules star began badgering him in the same manner he did to her.

Seeing The Big Bang Theory star dance for the camera wasn’t even the best part. What tipped the video over the edge was the heartwarming exchange between the duo.
“Someone’s happy!,” he said to Kaley as she bounced up and down. “Yes! Flick the pony!” She then cheerfully mentioned just how much she loved her awards ensemble. “I love it so much! Oh my god, I love this dress!”

Unsurprisingly, The Flight Attendant fans enjoyed the never-before-seen video so much. Many immediately went to Brad’s TikTok comments to voice their thoughts. Several folks loved seeing the 8 Simple Rules star get all joyous over a very particular element of her dress.

We definitely agree — Kaley looked absolutely joyful before her big fashion moment at the 2021 Emmys. With this year’s ceremony just around the corner (September 12, to be exact). Let’s all hope we get another overjoyed reaction about her dress. And with Brad at the reins, we know she’s going to look beautiful too.

Related Topics:Kaley Cuoco
Up Next