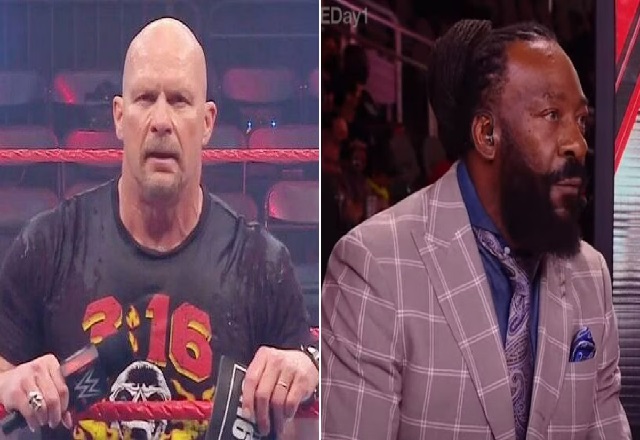 During his latest Hall Of Fame podcast, Booker T addressed the reports of Steve Austin returning to the ring. It has been claimed that the Texas Rattlesnake will be competing at WrestleMania 38, something that Booker likes the idea of.

You know it’s in your head, ‘I can do this no problem, just keep walking.’ It’s one of those type of deals, and then you get in the ring. You hit the ropes one time, and you go, ‘oh man, this feels good, I am back.’ Then the question is, ‘can I pull this off?’” Booker T then spoke about what a moment Steve Austin appearing at WrestleMania could be. He claimed that the entrance alone will be worth the price of admission for the fans in attendance.

“It’s a win just watching Steve Austin make the walk, the glass breaking, chugging a Stevewiser. That right there alone is going to be worth the price of admission, just that there alone,” he stated. “I always said Stone Cold Steve Austin had the best ring entrance out of all of us. I thought my entrance was cool, but I always thought, ‘man, I wish I had Stone Cold Steve Austin’s entrance.’ When they actually had the glass that would break on stage, good god, man. For me, he’s one of the guys, when you say if anybody could come back one more time, it is Steve Austin you want to see.”

Booker T believes that it would be another great moment to add to Austin’s career. The Hall Of Famer noted that a lot of fans never got the chance to see Stone Cold work live.

“You don’t see him coming back and giving Kevin Owens a freaking major Stunner, and the crowd going crazy? You don’t see that as another great moment? It’s not a risk,” he added. “I think the script written properly, Stone Cold Steve Austin coming back, having a freaking moment at WrestleMania 38, it doesn’t get any bigger than that.

That’s what WrestleMania has always been about. Great stories, giving people a moment that they’re going to remember for the rest of their lives. A lot of people of this era never got to see Stone Cold Steve Austin deliver that Stunner in the ring, live and in living color. So I say, let’s do it.”