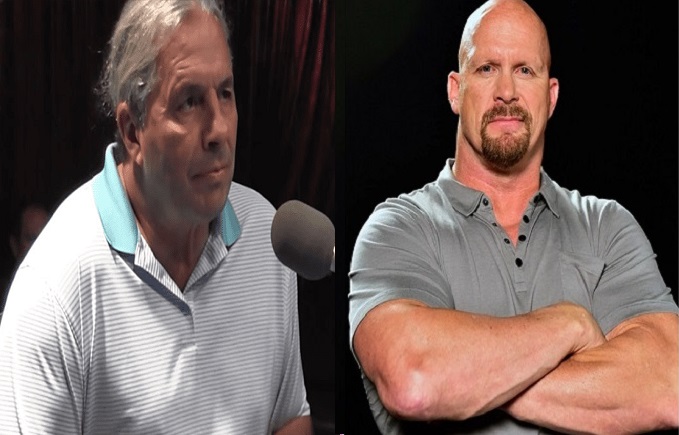 WeYou’ve seen the image a thousand times. Stone Cold Steve Austin, blood streaming down his big bald head, dripping onto the canvas and in between the gap in front teeth, as he screams in agony, in the midst of a Bret Hart sharpshooter.

He screams until he passes out, in what would become one of the most iconic moments in wrestling history. A moment that fellow WWE legend, Christian, describes as ‘maybe the greatest visual in the history of Wrestlemania.’

With Wrestlemania taking place this weekend we’ve been reflecting on some of our favourite Mania moments and this is certainly one of them. But what you may not know is why and how Stone Cold came to be bleeding on that fateful night in 1997.

Austin and Hart appeared on the brilliant Edge and Christian podcast last year in an ‘Anatomy of Match’ special to talk through everything that went into that classic, including the pair’s decision to secretly make Stone Cold bleed despite the fact there was a strong no blood policy in the company at the time.

Being a submission match, it greatly limited the number of possible finishes they could have for the match but Vince McMahon had the brainwave that it should end with Austin passing out from a Bret Hart sharpshooter.

The underdog refusing to give in. However, Stone Cold wasn’t completely sold on the idea but when he conveyed his worries to the chairman he responded ‘Oh Goddamn Steve, I promise you this will work!’

Once alone, Bret approaches Austin and says ‘Steve if you’re going to pass out from this sharpshooter you need to have colour,’ meaning he needs to be bleeding.

Now obviously going against the rules like that could land Stone Cold – who was barely in the company a year this point – in a lot of hot water but Bret stepped up to the plate and said he’d actually do the deed.

He tells the story:

I said you don’t want to take any chances at Wrestlemania. Trust me, let me do it. He trusted me … I remember one of the first things I learned in the business was to never let anyone do that to you and Steve totally trusted me. I said ‘Trust me because I’ll do it right’ …

There could have been a lot of heat. I could have been in just as much trouble as Steve at that time. They had had a no blood policy for a while and the toy companies and everybody were on Vince’s ass.

So I was like ‘Let’s just pretend it was an accident. What are they guna do?’

Austin quickly agreed to the plan. ‘I’d done many blade jobs before but when the man, Vince McMahon says no colour, I’m going by those orders, and Bret was covering my ass.’ Hart did give him an out however, telling him that if he didn’t want to carry through with it, just shout.

So the pair are midway through the match and the crowd is eating out of their hand. It’s already shaping up to be an all-time classic and Bret asks Austin does he still want to go ahead with the plan. He flip-flops slightly but Hart said there was no turning back. He already had the blade out.

Steve goes to throw me into the railing and I’m reversing Steve but if you watch, I’m going into Steve’s ear and I’m yelling at him ‘It’s too late!’ I walked over and I’m looking right at all the fans and Steve’s looking at the fans.

It’s right in front of everybody, including Vince, who’s one foot away. We did it and if you look at it it is absolutely perfectly done.

And so, in a split second, while up against the barricade, the deed was done. You can barely notice it on tv.

‘This is a surgeon general. Again, the only reason I didn’t do it myself was that I didn’t have the seniority in the company and I didn’t want to get my ass handed to me by Vince, so I was under Bret’s insurance policy.

Minutes later, they were back in the ring and Stone Cold was in the wrenches of Bret Hart’s sharpshooter. They created a moment that nobody would ever forget.

We needed that drama at the end of the match. I’ll never forget Bret making that call and when you look, that imagery … that colour, that iconic visual of me …from when he put it on, to when he turned me over and to when I passed out, that was absolute magic.

How Jerry Lawler, wrestling inspired Memphis football to bring back its ‘Turnover Belt’