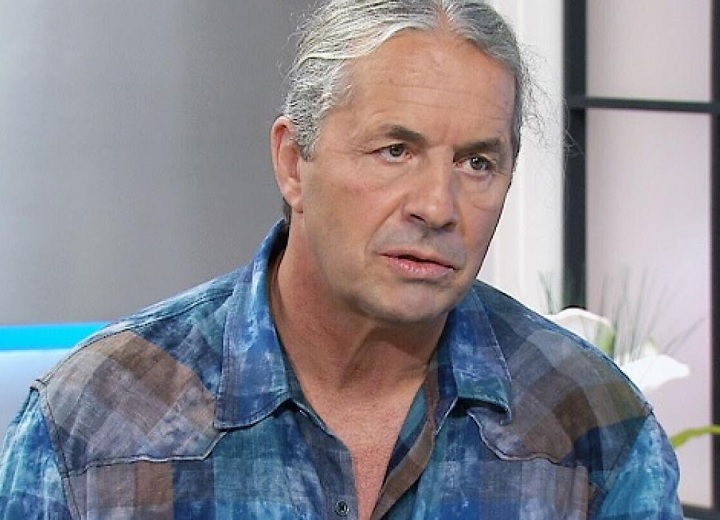 While WWE legend Bret “Hitman” Hart had one of the most celebrated careers in the history of professional wrestling, many fans were unimpressed with his time in WCW from 1997 to 2000, citing the lackluster way the Excellence of Execution was booked.

As it turns out, Hart himself feels the same way and, in fact, wishes he had never signed with World Championship Wrestling in the first place.

Hart offered his thoughts regarding his time in the now-defunct promotion during a recent appearance on WWE Backstage alongside hosts.

Bret Hart said that he remembers Vince McMahon told him that WCW wouldn’t know what to do with him if he went there and it turned out to be true.

“The funny thing about it all is I remember [WWE Chairman Vince McMahon] saying that to me,” the Hitman said. “He goes, ‘WCW would never know what to do with a Bret Hart.’

And, you know, it’s like, after about three or four months there, it’s like, I realized how incredibly true that was — that they really didn’t know what to do with me.

Hart believed that there was too much politics involved, and his ideas were rejected continuously.

“They had no appreciation for my skills or my abilities,” Hart continued. “I remember often going to [WCW President] Eric Bischoff and going, ‘How about throwing me with this guy?’ or ‘How about putting me with Booker T?’ or ‘How about I do this?’ …And they would always come up with the most lame reason why… that I couldn’t wrestle you [referring to Booker T], ’cause you were working with somebody else… I remember going, ‘That’s not even a reason.’ …They didn’t really know what they were doing and I’m not sure what the politics of all that were.”

Bret Hart’s in-ring work has been rightfully praised for his ability to tell a story, and WWE Superstars like Kevin Nash, Shawn Michaels and The Undertaker have some of their best matches with The Hitman.

Bret Hart regrets his time in WCW when he left WWE

It is at this point that Booker T himself chimed in. “I can answer that,” he said. “We were good workers. We could go out and perform. They didn’t want anybody outshining the top dogs in that company.”

Booker T then asked if Bret could do it all over again, what would he do? Bret said:

“I think I figure out a way to stay in WWE. Knowing what I know about WCW, I’m sorry I ever went there.”

It is one of the biggest what-ifs in professional wrestling, but WWE History would have been different had he not gone to WCW.

The controversial circumstances surrounding Hart’s departure from WWE — then known as WWF — in the 1990s are well known among wrestling fans and historians.

For the uninitiated, however, Hart was encouraged by WWF’s Vince McMahon to pursue a contract with rival promotion WCW, as WWF was in dire financial straits at the time and could no longer afford to honor the lucrative, 20-year contract it had previously signed Hart to.

Then-WWF Champion Hart signed three-year deal with WCW, with his final match for WWF set to take place at the 1997 Survivor Series pay-per-view against Shawn Michaels.

While Hart knew he would have to drop the championship, he refused to lose it to Michaels — who was notoriously difficult to work with at that point in his career and had a long-standing, real-life feud with Hart.

As such, Hart and McMahon agreed that the former would retain the belt at Survivor Series, then vacate it the next night on Monday Night Raw or lose it at a later date (as Hart’s WCW contract did not officially begin until the following month).

However, a paranoid McMahon began to fear that Hart would take his company’s top prize to his competition’s television show. A plan was devised to betray Hart’s wishes and take the belt from him at Survivor Series.

In an event that has come to be known as the “Montreal Screwjob,” Michaels used the Canadian-born Hart’s own signature submission hold — the Sharpshooter — against him, with referee Earl Hebner ringing the bell and awarding the match — and the championship — to Michaels on McMahon’s orders, despite the fact that Hart did not tap out.

An enraged Hart then proceeded to spit in McMahon’s face and destroy the ringside area, before reportedly knocking McMahon out backstage.

As Hart attempted to carve out his career in WCW, his relationship with WWF was further strained when his brother, Owen Hart, tragically died on the company’s watch during the infamous incident at the Over the Edge PPV in 1999.

Bret would be forced to retire from in-ring competition one year later after suffering a severe concussion during a match with Goldberg in WCW.

In more recent years, Hart’s relationship with WWF/WWE has been somewhat mended. He is a two-time WWE Hall of Famer, being inducted in 2006 as a singles competitor and again in 2019 as part of the Hart Foundation stable alongside Jim “The Anvil” Neidhart.

He has made multiple appearances for WWE this side of the millennium, though most recently has popped up in the fledgling All Elite Wrestling.

Bret Hart: “I’m sorry that I ever went to WCW”