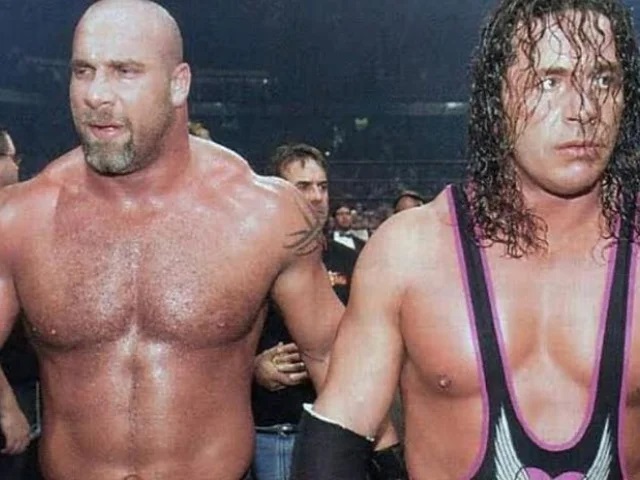 The 62-year-old Canadian left the WWE in 1997 during the height of the Monday Night Wars and made a sensational move to WCW. But Hart’s in-ring wrestling career was cut short after his match with WCW legend Goldberg at the Starrcade PPV in 1999.

Goldberg nailed the WWE legend with a thrust kick to the head and caused him to have a severe concussion, along with Hart claiming that he might have picked up other injuries he wasn’t aware of in the clash. Hart, whose injuries resulted in him suffering from post-concussion syndrome, told Prime Time with Sean Mooney that Goldberg cost him “$16million in like one second.”

He explained: “I wish that Bill Goldberg had never kicked me in the head as hard as he could. “I don’t know how you give a guy a Hall of Fame thing for hurting as many wrestlers as Bill Goldberg hurt, and without consequence — he usually got a pat on the back and told how good of job he did out there when you’re scraping the wrestler that worked with him off the mat.

“When Bill Goldberg kicked me in the head, I honest to God lost about $16million in like one second. “I just signed with WCW for $3million a year for another three years on top of the two years I had left on my original contract, so it was bad timing and unfortunate.”

Hart, who has been inducted into the WWE Hall of Fame twice, had his contract with WCW terminated in 2000 and would announce his retirement from wrestling that year. Goldberg, 52, was one of WCW’s biggest attractions and had an initial short stint with WWE from 2003 to 2004.

He returned to the WWE in 2016 and reignited his feud with Brock Lesnar, along with capturing the Universal Championship from Kevin Owens at Fastlane in 2017. Goldberg, who has made sporadic appearances with WWE since 2018, was inducted into the WWE Hall of Fame last year.