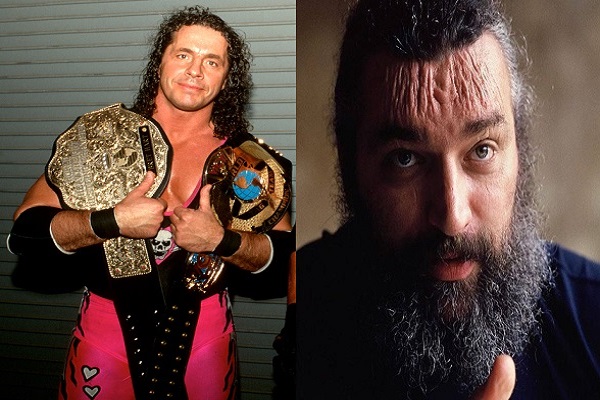 “I had always been grateful to Bruiser Brody for bucking me up with some kind words during my first months on the road with the WWF when Chief was riding me.

In case you didn’t know

Frank Donald Goodish best known as Bruiser Brody died in 1988 from stab wounds suffered backstage in a shower during a wrestling event in Puerto Rico.

The killer was José Huertas González, the wrestler known as Invader I. A jury acquitted González of murder, ruling that González killed Goodish in self-defense.

Bret Hart continues: The last time I’d seen him was during a chance meeting at the airport in Detroit.

André [the Giant] rode on those airport trolley carts that zip around inside the terminals, so Jim and I hopped on.

Coming around a corner, we ran into Brody, who laughed at the sight of us.

My last memory of him was his wave and his smile.

On July 16th, Brody had been called into a dressing room in Puerto Rico by the booker, José González, who also wrestled under a mask as The Invader.

González, whom I remembered from my time in Puerto Rico as an easygoing guy, stabbed Brody with a butcher knife and left him to die on the dirty bathroom floor.

Supposedly, Brody had been a bully to González in the ring one time too many, and González snapped. All the wrestlers were too scared to help Brody, so they sat there for over an hour while he died.

No wrestlers would testify against González because they were afraid that if they did, they wouldn’t live long enough to get off the island! González used self-defense as an argument and was acquitted.

This was one of the most horrible things that ever happened in the wrestling business.”