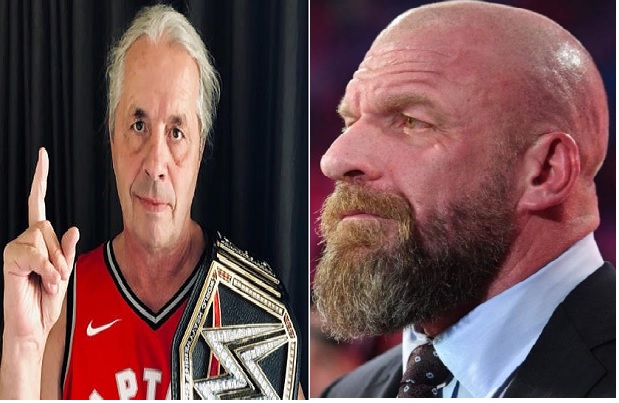 WWE Hall of Famer Bret Hart has criticized Paul “Triple H” Levesque, asking “What has ever done that was great? I don’t think that he’s ever had a match that was great.”

Talking to the Daily Star’s Patrick Lennon, Hart also slammed the widely admired Triple H vs. The Undertaker bout at last year’s WrestleMania, calling it predictable and “mediocre, at best.”

He’s not too harsh on the WWE executive though, also acknowledging during the interview that he “always had a certain amount of respect” for Levesque, and considers him a “pretty good wrestler.”

Hart’s comments are intriguing, for a few reasons: As anyone who saw 1998’s Wrestling with the Shadows documentary can attest to, it’s not exactly a secret that there is/was tremendous heat between the pair, stemming from Hart’s backstage battles with Levesque’s best friend, Shawn Michaels.

The wrestler was also outspoken about his negative feelings on Levesque in a 2003 interview with Canadian talk show Off The Record, calling him “cowardly” and “not one of the boys.”

However, with relations between WWE and Hart seemingly being better than ever (Hart even showed up on-screen at Sunday’s Royal Rumble in a backstage segment to give new World Heavyweight Champion Alberto Del Rio his seal of approval), it makes you wonder just what the star is thinking here.

Regardless of whether Hart’s comments are accurate or not, why is he jeopardizing his great working relationship with WWE by trashing the man who is set to be in charge of the company after Vince McMahon retires?

Certainly, at this point, it’s hard to imagine Hart having any meaningful role in a Levesque-led WWE if he continues to diminish the executive’s accomplishments.