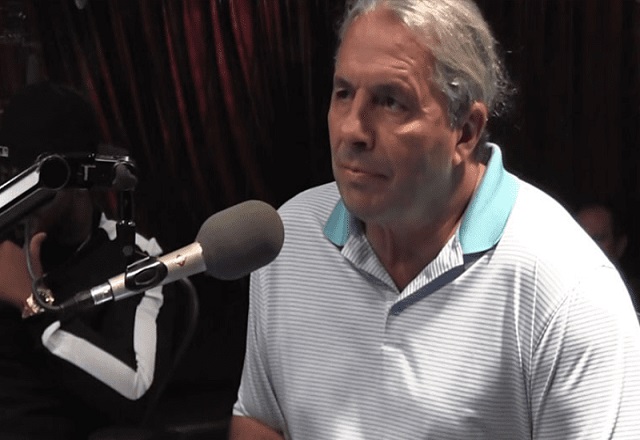 On a recent episode of Confessions Of The Hitman, WWE Hall Of Famer Bret ‘Hitman’ Hart talked about the most challenging battle of his life – his recovery from suffering a stroke in 2002.

During the show, Hart got in-depth with respect to his stroke and rehabilitation process. Also, Hart discussed the role being concussed by Goldberg played in his stroke. Finally, Hart talked about his current health status.

According to Hart, recovering from his 2002 stroke was the most difficult battle he has endured in his entire life. ‘The Hitman’ paraphrased the great John Cena, as he indicated that he was proud of himself for ‘not really giving up.’

“Hands down, the most challenging battle I ever had; that’s for sure. I’ve talked a lot about my stroke over the years. As difficult as it was, I’ve always been really proud of how I recovered through it.

I willed myself to not really give up, and I think it’s a little bit like, I wrote in my book that it was kind of time to be the hero I was pretending to be in [pro] wrestling.” Hart added, “I did not give up. I kept pushing the envelope the whole time.”

When Hart first suffered his stroke, he was eager to get started on a recovery plan, only to learn that there is no real certainty surrounding recovery.

“So it’s like, ‘okay, I had a stroke. When do I get out of here? Like, what do I got to do? What’s the plan?’” Hart explained, “And you find out pretty quick that there is no plan. You cross your fingers and pray that that day you have a good recovery.

And I remember that day I really wanted to recover, I was going to go down fighting.”

Hart compared the feeling of having a stroke to being half-dead inside.

“It’s like if somebody cut your whole body in half with a saw, and the left side is completely dead and the right side is alive. Like, I couldn’t lift my finger or hand, I couldn’t blink my eye. It was wide open. I could close it to sleep. And I’ve always had trouble smiling now, on my left side.” Hart notes, “certain muscles didn’t come back.”

In Hart’s view, getting concussed by Goldberg was likely related to his stroke. ‘The Excellence Of Execution’ indicated that he similarly saw stars following both incidents.

“I always felt they were [related]. Like, when Bill Goldberg kicked me in the head, I saw stars. I saw a million stars, and I know a lot of people who have seen stars like I did.

You know exactly what I’m talking about when you really get rocked. You see stars, a million silver particles in your head flying around in both eyes.” Hart continued, “When Bill Goldberg kicked me, I could see stars.

The right eye was fine, but the left eye, it was the same thing. It was a million stars in my left eye, and I remember going, ‘the concussion.’”

Hart went on to say that he would give his current health a solid 9/10 rating.

And I did that a long time ago, like three or four years after my stroke. Five years, I could benchpress. It wasn’t the prettiest benchpress you ever watched, but I’ve always pushed myself and tried to challenge myself to make that left side work, and earn it.”

Jim Ross On Vince McMahon Keeping Quiet About His Family…