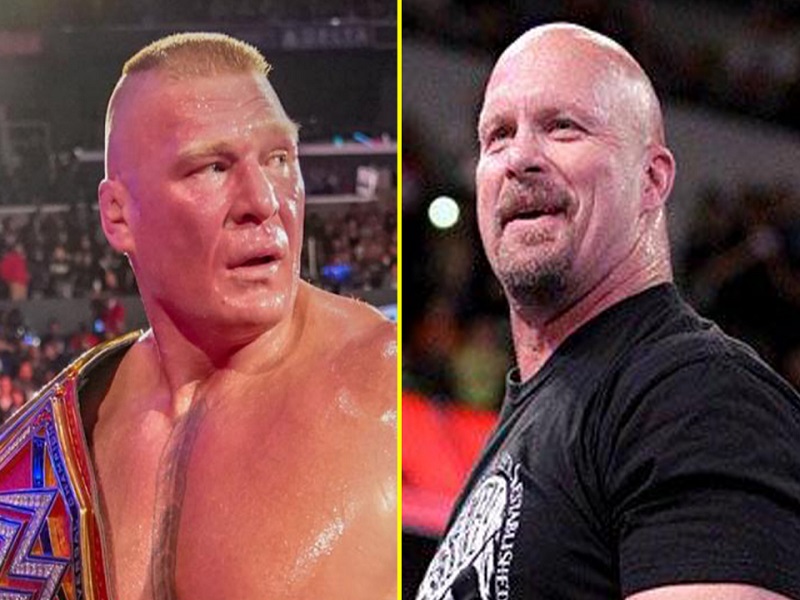 Steve Austin has one of the most recognisable voices in wrestling history and we’ve all given it a ‘What?’ or a ‘Hell Yeah!’ at some point in our life.

Lesnar is a huge admirer of the ‘Texas Rattlesnake’ and during a rare media appearance on the Pat McAfee Show, the former UFC star went to town while McAfee and co-host A. J. Hawk provided their own ‘What?’ chants.

“HOW ABOUT A COUPLE OF BEERS? HOW ABOUT YOU? AND YOU?”

All three men burst into laughter as they attempted to continue with their conversation.

Lesnar then slipped back into the Austin impression before laughing once again. Since returning to WWE in August after a 14 month absence, Lesnar has shown more personality after playing it straight for most of his career. The nine-time world champion cutting his own promos on RAW and SmackDown, in comparison to his previous runs when he’s worked with Paul Heyman closely.

Fans have reacted to Lesnar’s impression and they’re desperate to have him face-to-face with Austin. One commented: “Brock is this funny and the WWE hid it from us for almost 20 years. How dare they!!!!!” Another said: “This is absolutely amazing and has made my day.”

A third put: “The best Stone Cold impression I’ve ever heard.” While someone tweeted: “Brock is living his best life right now, we need to hear this on TV.” Lesnar also broke a table during the interview after being told not to. There’s always going to be carnage when the ‘Beast Incarnate’ is around.

Interestingly, Lesnar and Austin never had a match in WWE