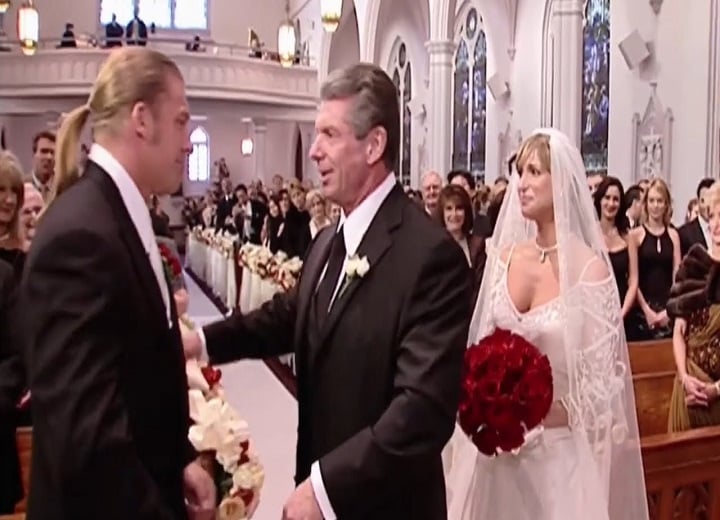 Triple H and Stephanie McMahon were married 17 years ago in real life and Bruce Prichard recently devoted an entire episode to their on-screen marriage recently on Something To Wrestle With.

It was a lavish affair which he detailed pretty well, but the story that stole the show was when Michael Hayes decided he was going to turn their reception into a rock show.

Bruce said they flew up to what he referred to as a “compound” in Upstate New York. Since it was such a high-profile marriage, security was on high alert and he explained some clever and extensive measures they took to make sure that everyone there was on the guest list.

“When you checked in, when you went through the gates at the very beginning, you arrive the guardhouse would check your name off and say, ‘Okay, Bruce and Stephanie Prichard that’s 2 guests’ and you got a gold coin.

Each person had to have this coin on them at all times to be able to present it to any staff or any security on the premises to prove that they were with the wedding.”

The “compound” had a bar, hotel, grand hall, etc and Vince McMahon had rented the entire thing for his daughter’s wedding. He said there were gift baskets every morning with water, cookies, and other things as well as luxury buses to take everyone from the hotel to the wedding at a church.

Prichard said he had a great time at the bar on the night before the wedding with JBL and Fit Finlay. But overall it was a “fairytale wedding.”

He said that there was a lot of alcohol consumed after the wedding during the reception where Vince McMahon and The Undertaker started doing shots as well as most everyone else who was there. All of a sudden, things started to get very entertaining.

“Out of the blue, there reaches a point — and Michaels Hayes is one of those people and I love Michael Hayes. But Michael can reach a point where he goes over the edge and Michael reached that point fairly early on in the wedding and he had gone up and he sang ‘Jailhouse Rock’”

“Michael got up with the live band and sang ‘Jailhouse Rock’ and brought the house down. I mean everyone is standing, everybody’s dancing going: ‘Yeah Michael! F*ckin’ A! FREEBIRD!’ Just stole the show. But he couldn’t leave it at that.”

“He had a few more shots and decided, ‘I have a song that I’d like to… Paul… St…St… Stephanie, I’d like to woooomaa…hang on, hang on… I don’t need no f*ckin’ band! I just gonna sing it acapella!’ And he’s trying to sing, I guess he was trying to sing.”

Prichard explained that the Freebird just had enough to drink where he had morphed into somewhat of a stumbling mess where you couldn’t understand what he was saying.

Then Hayes asked, “What are you gonna do you shooter boy?! What you gonna take me down?! F*ck you, I’m a Freebird! Take me down, shooter boy! I wanna sing me a song.”

Suddenly, Linda McMahon showed up and snatched the microphone away and dismissed Michael Hayes from the stage.

It just shows that Michael PS Hayes is always going to have a little Badtown USA in him no matter what kind of magical night is going on around him.