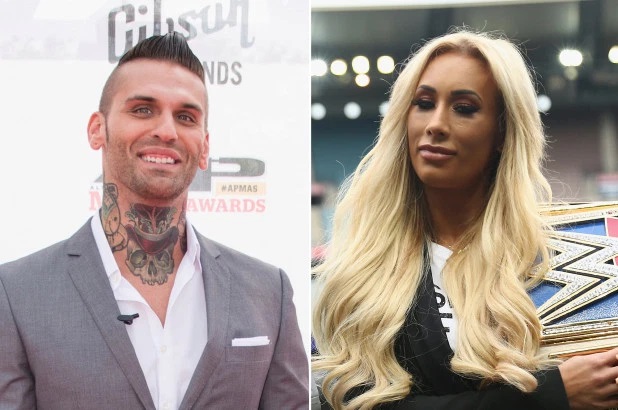 WWE female superstars often get to face trolls on the internet and social media as people often consider them to undergo plastic surgeries/breast implants.

Carmella is one of those who faced similar questions in the recent past regarding his body. So she opened up about it on a platform provided by the company she works for.

WWE has launched a new digital series called “If It’s On The Internet,” where wrestlers can confirm or debunk rumors that have circulated online.

Carmella is in a relationship with WWE commentator Corey Graves from 2019. She was previously with former WWE superstar Big Cass but they broke up in 2017.

Graves was in a marriage which ended after his wife found out he was having an affair with Carmella.

On rumors that she(Carmella) dated John Cena: “That is so far from the truth. I barely know John Cena. Because we both live in Tampa, people thought that we were dating? Yea, that’s completely fabricated.”

Carmella caused Corey Graves’ divorce: “That is so far from the truth. I would never in a million years do that. When we first started dating, he was already going through the process of divorce.”

Carmella has had plastic surgery: “That’s true, I’ve had breast implants.” She did this for the love she has for boyfriend Corey Grave.

Speaking on her plastic surgeries, Carmella revealed that she has done breast implants.

Carmella, who used to date former WWE grappler Big Cass, has also been linked with another big name in the past… none other than the legendary John Cena.

And while appearing on his ex-fiancé Nikki Bella’s podcast she also attempted to end speculation she and the 16-time champ had dated last year.

Carmella said: “That is the most insane rumour.

“It was when I had broken up with my ex and he had been seen out in a bar in Tampa, and they just assumed he was with me and we are dating.