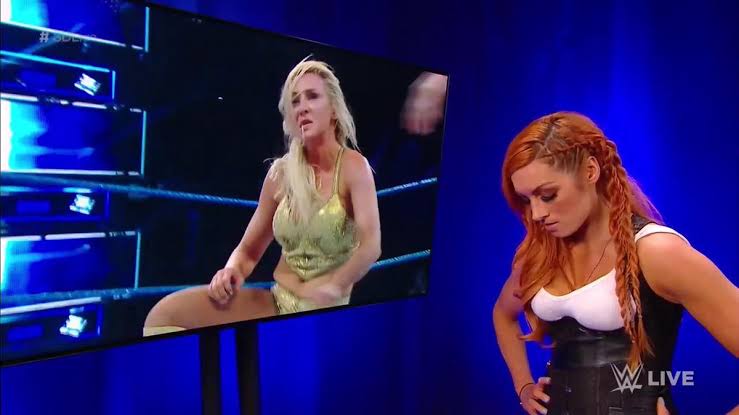 Charlotte Flair battled Rhea Ripley at WWE Money in the Bank, which was the first pay-per-view with fans back in the arena.

The two were met with chants of “We want Becky,” leading to Charlotte flipping off the crowd. By the end of the match, the crowd chanted “This is awesome.”

Speaking to Renee Paquette on Oral Sessions, Charlotte discussed the chants and her decision to flip off the fans.

If you know what I’m capable of, show the respect up front. I’m usually cookie-cutter, black and white, happy Monday, happy Tuesday.

In that moment, I felt it and was like, ‘let me steal the show with Rhea Ripley because I know she’s that good. Don’t disrespect her.’ I’m used to it and can take the beating,” she said.

When asked why she is usually showered with chants of Becky, Charlotte said, “What (Becky and I) did with each other, with Evolution and her turning on me to getting to the main event (of WrestleMania), they just know that’s the only way to attack Charlotte Flair. I don’t know how else you’re going to attack me.”

Off-screen, and at various points on-screen, Charlotte and Becky were best friends. Their relationship has changed over the years as they’ve walked different paths in life.

When asked where their relationship stands now, Charlotte said, “She’s a mom and she’s so happy. To see the ride she’s had, to go off and have a baby.

For me to see that on the outside, I’m looking at it like, ‘you can have it all and do it all. You can be a mom and main event and still come back.’ I’m looking at Becks like, that’s inspiration and goals.

Are we driving around calling each other Thelma and Louis and eating omelets anymore? No. We’ve both grown up.

“I don’t think anything happened. We depended so much on each other as best friends, it was easy. She was my ‘ride or die’ and my ‘go to,’ it just needed to happen.

I met Manny [Andrade], she met Seth [Rollins], her career took off. I always say, the fans booing me through all of that when I was supposed to be the good guy is the greatest thing that has ever happened to me as a performer because it really…I was like, ‘Cheer me, I’m the good guy.’ No, be Charlotte Flair, be unapologetic.

Don’t be sorry that you’re that good. I was almost pandering for them to like me instead of going out there and being the Ferrari. It took me to where, when I wrestled Ronda, I’m like, ‘This sucks. There is a three-day build, I’m wrestling Ronda Rousey. This isn’t supposed to happen. I know how good I am.’ What do I have to do? Show the world how good I am. So, I did that. Had I felt that confidence during the feud with Becky, how the fans viewed me, they would have seen that badass that beat Ronda to hell with a kendo stick with Becky. Instead, they saw this girl that was like, ‘Noooo, you like me, right?’ Why do I care so much?”

Charlotte said she’s always been a bit of a people pleaser and had a chip on her shoulder. Her confidence during that time did lead her to become one-third of the main event at WrestleMania 35.

Charlotte and Becky are back on top of the WWE Universe with Charlotte capturing the Raw Women’s Title at SummerSlam and Becky returning to win the SmackDown Women’s Championship.