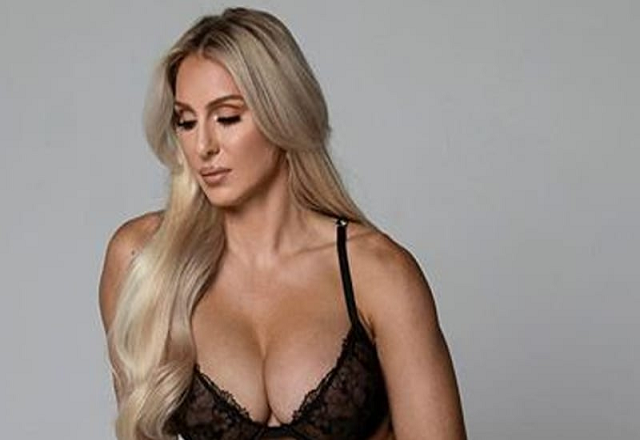 Charlotte Flair is currently out of action from WWE Raw as per a storyline injury suffered at the hands of Nia Jax. The Irresistible Force thrashed her left hand to the guardrails of the Performance Center to hurt her and she had to go into a hiatus. In reality, She had elective surgery, and it’s unclear at this point when she would be back in action.

While previous reports claimed that Charlotte Flair will only be back around Royal Rumble, next year, she herself claimed to return as soon as possible. In the meantime, Charlotte Flair posted a photo that can be described as ‘breath-taking’.

The shot shared on Instagram is bound to stop anyone from scrolling down. The Queen was seen in black lingerie.

You’re the one designed for me.”

We can only assume that Charlotte Flair was talking about her beau, Andrade. These two seem inseparable while spending time together during the quarantine days.

It was already reported in recent weeks that Vince McMahon has some big-time plans for Charlotte Flair in the near future. Since Becky Lynch is in the middle of a pregnancy hiatus, Flair is the perfect person to replace her for the top position on the Raw Women’s locker room.

She’s destined to be on that position and this short hiatus could only be a bump for her in the road to success. She’s soon to become champion, again being the number one threat to Asuka’s title reign.

While appearing on The Wrestling Inc Daily Podcast, Ric Flair talked about her daughter’s future in the company. The Nature Boy disclosed that Charlotte Flair has received an offer to star in a TV series. The production team of the series has been actively pursuing her for it.

Then Flair added that he hopes Charlotte Flair to go through her SummerSlam responsibilities with the WWE as she eyes to be back within a few weeks.

Following that, she might go for another break from the company, if the TV deal gets confirmed. Currently, Flair vs. Nia Jax vs. Asuka is the likely plan for SummerSlam 2020. Here’s more from Ric on the current situation,

“I’m actually hoping that when she finishes her commitments up at SummerSlam or whenever it is – I have no idea when. I know she has a TV series looking at her and she’s got fitness people wanting to do work with her.

I hope that she takes as long as she wants off so that all these people that can fill her shoes and do that every night have the opportunity and God bless that thought.”

Related Topics:Charlotte Flair
Up Next