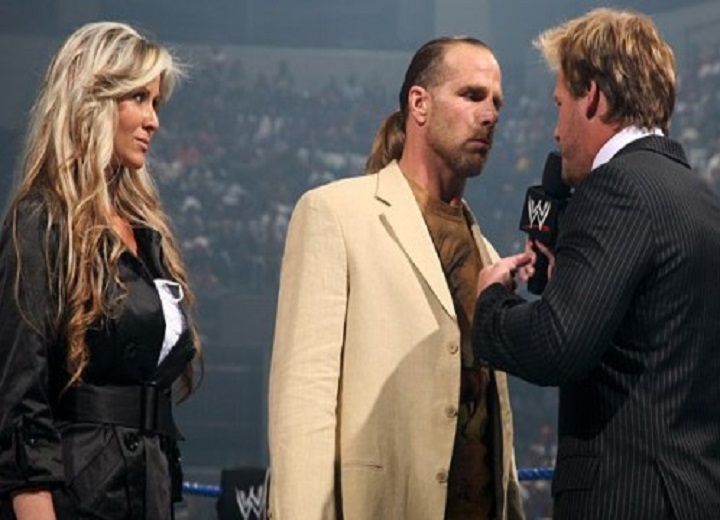 Shawn Michaels Vs Chris Jericho’s 2008 feud is still regarded as one of the hottest fights in history even though the match didn’t exactly go as planned. At SummerSlam 2008, Shawn Michaels and his wife Rebecca came down to the ring to cut a promo, with the former WWE Champion set to, as part of the storyline, retire from in-ring action.

After a passionate promo, Chris Jericho made his way down to the ring and said that he wouldn’t allow Michaels to retire, wanting HBK to say that he was retiring because of him. The segment saw Chris Jericho swing for Shawn Michaels, but the wrestling legend ducked, meaning Jericho accidentally struck Rebecca instead.

Chris Jericho, who obviously felt incredibly bad about striking Rebecca, opened up about the incident in his book, entitled ‘The Best in the World: At What I Have No Idea’.

“As Shawn and Rebecca turned their backs to walk away, I spun him around and threw a punch at his head. He ducked out of the way, leaving his wife directly in the line of fire, and I smacked her full force in the mouth. For real.” Again, Jericho felt incredibly bad about the situation, repeatedly apologising to Rebecca and Shawn as the trio got backstage after their segment at SummerSlam:

“They carted her out on a stretcher, and when they got backstage, I kept repeating over and over again, ‘I am so sorry, man. I am so sorry.’ The doctors tended to Rebecca as Shawn stared at me blankly like he wanted to kill me.” To her credit, it seems like Rebecca was fully understanding of the situation and didn’t hold a grudge against Jericho, even having some fun with the former World Heavyweight Champion:

“He finally broke the silence, ‘I should’ve never allowed this to happen. This never should’ve happened. I can’t believe I brought my family into this.’ If it was possible to feel worse than me, he did. We were both staring at our feet in silence, waiting to see if Rebecca was okay, when she suddenly sat up off the stretcher and looked me in the eye. ‘Is that the best you got, Jericho?’ she said with a crooked smile. Shawn and I looked at each other and started laughing as he gave his wife a hug”