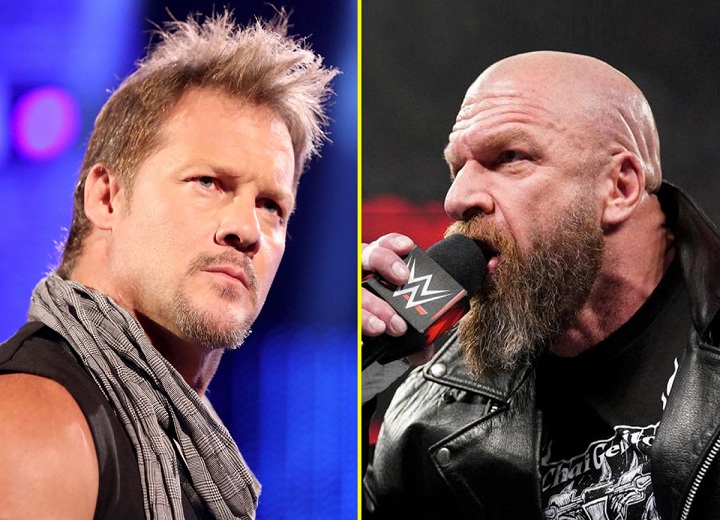 It’s no secret that Triple H wasn’t afraid to make an enemy or two during his prime in WWE. The Game arrived in the main event scene just before the turn of the millennium and he was going to fight anyone tooth and nail to make sure that’s where he stayed.

Of course, his issues with The Rock around that period are well documented, but Chris Jericho has now brought to light some of his issues with the King of Kings from the same period.

Jericho signed with AEW after nearly 20 years working with WWE on and off. He was the company’s first world champion before Jon Moxley took the mantle at their last pay-per-view, Revolution.

Jericho, brought instant credibility to the company, but he didn’t leave WWE on bad terms. In fact, he now cites Triple H as a good friend in the business.

However, speaking to Rich Eisen, Jericho opened up about some of the past issues he had with the godfather of NXT.

“I think there were guys, in the past, that I had issues with. I mean Triple H is one of them. He’ll tell you the same. In the early 2000’s, we didn’t have much [likeness] for each other, but we always had great matches, and I think that’s one of the reasons why.

“We just had this professional rivalry, maybe a bit of a personal dislike [for each other]. But fast forward five, six, seven years, you get to be older and wiser and think back. Why did we have so many problems? Why did we hate each other? Why didn’t we like each other? And now we’re friends.”

Given the landscape of wrestling back then and the height of the Monday Night Wars, competition for the top spots was fierce.

Generally speaking, most of the talent these days are friends. Back in the Attitude Era – not so much.

“I think there’s a lot of professional rivalry when you’re young full of vim and vigor as they say,” Jericho continued. “It happens in rock and roll bands all the time. Bands will break up, and 10 years later, they’ll get back together like why did we waste 10 years of our lives not playing together?”

While it might be a stretch to call it bad blood, Jericho believes that little bit of spite made the work they did together better, something Triple H himself has said about his matches with The Rock.

“I think there’s that animosity that drives you to become better, and if you have a case like say Jericho and Triple H, our matches were always great because there was a little bit of real-life animosity between us,” Jericho admitted.

Jim Ross: “Chris Benoit does not belong in the Hall of Fame now or ever”

Jim Ross says, “Chris Benoit does not belong in the Hall of Fame now or ever”