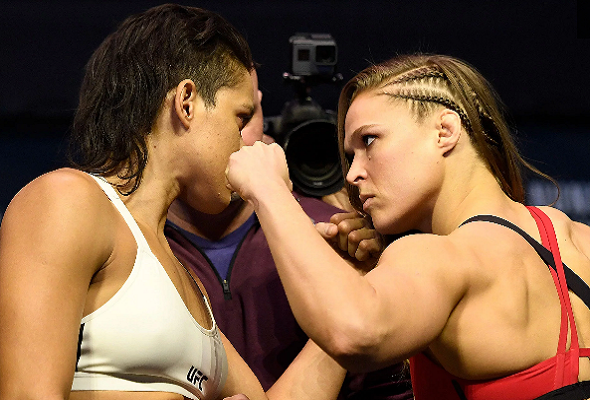 Former UFC star Ronda Rousey has received the most money per strike landed on an opponent in a single fight, it has been revealed.

The 33-year-old became the first female fighter to be introduced into the UFC’s Hall Of Fame in 2018 after an impressive seven-year spell with the organisation.

She accumulated 14 wins from 16 total fights, setting the record for most title defences by a woman after retaining her bantamweight belt on six occasions before a shock defeat against Holly Holm.

Rousey then retired from mixed martial arts in 2016 to pursue a career in professional wrestling with WWE.

Like many of the UFC’s top talents, she made a fortune in the Octagon and has been named as the fighter to have claimed the most money for every strike landed during a single bout.

The California-born judo specialist placed above Conor McGregor, Khabib Nurmagomedov and Anderson Silva in the list, revealed on Tuesday by Bonusfinder.

Rousey was paid an eye-watering £2.3million to fight against Amanda Nunez in 2016, a meeting that ended in defeat for the 33-year-old after she was knocked out inside 50 seconds.

The short nature of the bout meant that Rousey received £330,000 for each of the seven strikes that were successfully landed on Nunez.

Former UFC featherweight champion Jose Aldo took second on the list, taking home £308,000 after landing just one punch on McGregor during the pair’s title fight in 2015.

The Brazilian was stopped after just 13 seconds of the highly-anticipated featherweight showdown in Las Vegas.

The Irishman, who will return to combat sport on Saturday night against Dustin Poirier at UFC 257, placed third on the list having claimed £77,000 for each of his five strikes against Aldo.

He features four times in the top ten fights with the highest earnings per strike, earning £57,750 for each hit against Eddie Alvarez, £24,618 per strike in his defeat to Nurmagomedov and £11,726 in his 2016 showdown with long-time rival Nate Diaz.

The Russian has been tipped to make a sensational return to the sport later this year, with UFC chief Dana White keen to arrange one final bout in the form of a rematch with the Dublin-born fighter.

Alexa Bliss said, “Absolutely! I would love to, at some point, cross over