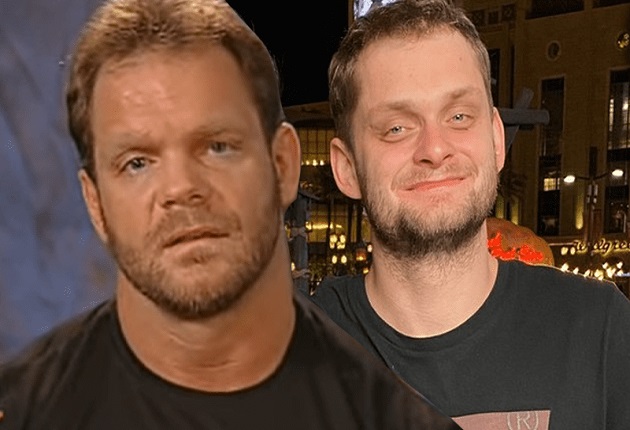 We’ve heard so much about second and third generation wrestlers that it’s become the norm to see someone with ties to a previous favorite of ours step into the squared circle.

Most, like Charlotte Flair, Natalya, and Davey Smith JR. pay homage to their parents with their entrances, ring attire, styles, or work on the mic.

There’s a thousand different ways they do it, and often without us connecting the dots unless it’s obvious, like Flair and Natalya.

Others seek to do just that. In that group we find Chris benoit’s son. David Benoit wants to wrestle as Chris Benoit Jr.. He even said he has his gear made and ready to go.

In an interview with Chris Van Vliet, David was open about the tragedy surrounding his father’s death, and explained how he only started watching professional wrestling when AEW (All Elite Wrestling) started.

It helped ignite a spark within him, and he decided to follow in his father’s footsteps and become a professional wrestler, too.

The big moment came when he announced he would wrestle as Chris Benoit Jr.

“I don’t own [the rights to] his name yet. I have his middle name I can legally use it and they can’t come after me. Yeah [I would wrestle as Chris Benoit, Jr] I think it would be cool. I’ve got the tights with the claw.”

He said he’ll even come out to Chris Benoit’s entrance music. He’s been taking with Our Lady Of Peace about it.

Where will he wrestle?

While this is getting ahead of ourselves as the 27 year old is still training (reportedly with the Harts and Lance Storm), he knows where he’d like to go.

He said he’d watch Natalya’s matches and Chris Jericho based segments, but WWE didn’t intrigue him. Once more from Ringsidenews: “They weren’t producing good things anymore. I saw the quality was going down, down, down, down.”

With WWE out of the equation for the moment, he’s stated he’d like to wrestler for AEW and/or NJPW (New Japan Pro Wrestling).

No matter how you look at it, David has a long and difficult road ahead of him, thanks to the father he wishes to pay homage to.

Chris Benoit was many things. He was credited as the hardest worker of his time. He was an incredible talent and superstar that paid his dues and climbed the ladder. He was an inspiration to many small to medium sized people that wanted to wrestle with the giants.

He also murdered his other son and wife, Nancy Benoit (Known as Woman during her time in professional wrestling) before committing suicide.

Whenever anyone mentions him, that’s the only thing they remember, and for good reason. We tend to remember the horrific and shocking while forget the good. It’s only natural.

Unfortunately, it’s often left out of the conversation that Chris faced many demons, including possible depression (as many have stated with his change of attitude), brain damage (a study claims his brain had suffered the equivalent of an 87-year-old dementia patient(, and possible steroids and other drugs.

Any number of those, if true, would create a deadly cocktail.

His brilliant, Hall of Fame bound career was derailed and is largely ignored because of those final acts, and understandable so. Because of his actions, attention was brought to head injuries in contact sports aside from boxing and has led to greater research and protections and has probably saved a good number of lives.

While Chris Benoit’s shoes are indeed huge to fill, It’s good to hear his son talk about not trying to fill them or be a carbon copy of his father in the ring.

Carving his own legacy

David Benoit wants to carve his own legacy, and that’s what’s really awesome about him doing this. He’s wants to pay homage like others have their parents before, and he seems to have a clear vision of what that entails.

It’s going to be a difficult road for him as many fans online have already stated his career is over because of his choice of names, but he appears undaunted.

I wish him the best of luck going forward. With any luck, we may be cheering for a Benoit once more.

The Undertaker: “Hulk Hogan Had Told You All A Lie… I Was Wrongly Accused”