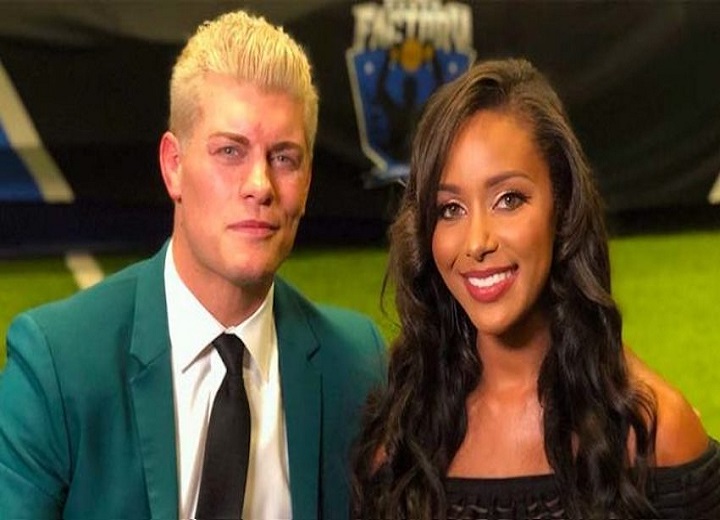 Cody and Brandi Rhodes, who were part of the original AEW crew along with The Young Bucks and Tony Khan, have left the promotion after failing to come to terms on a new contract. Both had signed three-year deals that expired on December 31, 2021. Over the last six weeks, there had been negotiations for a new deal with both continuing to work in community relations and on television as if they were staying.

Cody, who was TNT Champion, missed a title defense due to a COVID-19 issue with the family, but returned to lose the title to interim champion Sammy Guevara in a unification ladder match, one of his two best singles matches he had during his AEW run, the other being a classic 2019 match against his brother Dustin. Brandi had just shot an angle with MMA fighter Paige VanZant.

Behind the scenes, both had major positions. Cody was an executive vice president, headed community relations, and was also partners with QT Marshall on the Nightmare Factory training school where he will remain part of.

Dustin, who is staying and has said he’s very happy in AEW, was also training wrestlers. Cody also has been part of two television shows: Rhodes to the Top — a TNT reality show about the couple which ended up with the timing of Brandi giving birth to their first child and Go-Big Show, a wacky and dangerous competition show on TBS where he is one of the judges and was the pitchman in the television commercials.

The latter is in its second season while a second season for Rhodes to the Top was agreed upon some months back. No formal announcement was made and the belief has been with the situation as it is that it will not be back.

Until the negotiations fell apart on Monday, most of the top people in AEW were not aware anything was up and figured both Cody and Brandi were staying. Several were surprised and didn’t know anything until the day of, but one person did tell us that he never thought it would happen when Rhodes’ contract expired. That person did actually know this was coming for a few weeks and categorized it as unhappiness, even though everyone said that the EVPs were getting along the best they have in a long time. They were working last week on projects for the future. One person close to the situation used the term “heartbroken,” but didn’t know the machinations of the split.

Both have kept quiet on the talks and haven’t spoken to anyone that we are aware of regarding the split or what led to it. Until the split, Cody had acknowledged working without a contract but gave the impression he expected a new deal. Brandi, who was the company’s chief brand officer, had just closed a partnership deal a week earlier with the American Heart Association. Cody had worked strongly with Amanda Huber in the community relations division.

As far as the story behind the story, there is a ton of speculation right now. What we do know is that as of Monday morning, lawyers were involved working out the split. With no contract, both could go to WWE immediately. In WWE, there was locker room talk that Cody was possibly coming in. Whether Brandi would come in and wrestle wasn’t known, but it was clear that she wanted to be a wrestler and made it clear that after giving birth, she wanted to return.

Khan had said in the past that he had options on all the key talent for 2022. Rhodes did have an option year, and possibly a two-year one, so it would have been Khan’s call not to exercise it.

While we don’t know if the Rhodes’ deals are different, the big key original deals with the Young Bucks and Chris Jericho were all for three years, meaning they would end this year, plus an option period. The Bucks and Jericho’s options were picked up and they are still with the company. Kenny Omega’s first deal was for four years. Jericho was the highest money deal in the company until CM Punk came in at what was believed to have been the same level of money.

If Cody and Brandi are leaving, the only logical place they could go is WWE, but could this be a carefully crafted Brian Pillman-esque work? It always could be because this is pro wrestling. While there had been times Cody had butted heads with others, those discussions, differences of opinions, and arguments are always part of numerous people having different ideas of what pro wrestling is.

At the end of the day, Khan made all the choices, approving all angles and choosing who wins and loses. But there was never a period where the EVPs weren’t talking. Although Omega and the Bucks were close personally and the relationship between the Bucks and Cody was more business, they always talked and, again, were said to be on their best terms of late.

Cody absolutely had great input, but his character was struggling. He had been getting booed at every show by a percentage of the audience, probably starting with his feud with Anthony Ogogo. Some believed he was running the company and blamed him for making the call not to put younger talent over when he beat Ogogo. It was not his call and it was the only call that could have been made at the time with Ogogo needing eye surgery. However, nobody was privy to that information.

Cody tried to make it a United States vs. United Kingdom program, which would also get Ogogo over as a UK star since he has some name value there for being an Olympic medal winning boxer. Cody channeled his father in a controversial promo that some loved but others criticized. It was the type of promo that his father thrived upon that Cody was doing, right down to saying for this match he would be “The American Dream,” but it wasn’t as great with a very different type of audience.

When Cody beat Ogogo in the match, stories came out that he was not putting younger talent over. The irony is that was actually one of his strengths as all the EVPs probably put people over too much in the early days because they wanted the perception of what Cody’s father had. MJF, Darby Allin, Brodie Lee, Malakai Black, and recently Guevara were all elevated by beating Cody. He made it clear from an early stipulation that that he would never challenge for the AEW World Championship after a loss to Chris Jericho in 2019, one he vowed not to break. The TNT title became his domain with three title runs.

But no matter what he did, Cody couldn’t shake the booing at live events. Some believed it was because fans thought he went Hollywood doing two other shows. He would do promos talking about how he helped build the company and would not go heel. But it was one of those things where, even when put across the ring from Dan Lambert who did the anti-AEW Jim Cornette gimmick, a percentage of the crowd would boo Cody. Those live always said it wasn’t the majority, but boos travel better than cheers so the perception was worse and it became the thing to do. The same thing happened to Brandi, although her last interview was weird because she insulted the local fans on purpose by getting the town wrong, but then had a verbal battle with Lambert, one of the biggest heels in the company.

From a perception standpoint, this would be the first major AEW star to leave for WWE if it happens. The question is whether Brandi would be brought in as a performer. Obviously it hadn’t looked good for WWE for the perception that all the talent moves were one way. In that sense, this would be a major move for WWE. Still, Cody would always be pushed as a top star in AEW and WWE never saw him as that when he was there before and he left to prove he could be a top star. Signing a big money deal would at least guarantee him being used better than his first run. But he did have far more creative freedom with both his promos and his matches in AEW than he would in WWE.

Related Topics:Cody and Brandi Rhodes
Up Next