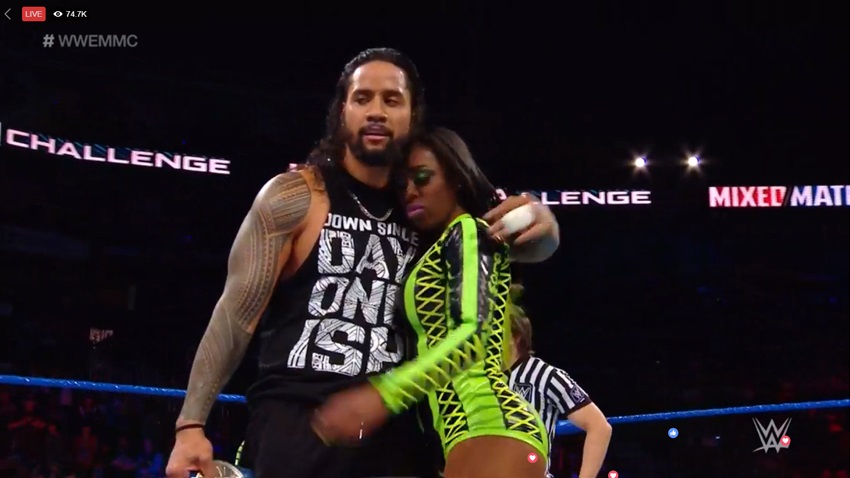 WWE superstar Naomi seems to have deactivated her social media accounts after vile abuse following her husband Jimmy Uso’s arrest. Her partner and fellow wrestler was arrested on a DUI charge few weeks back  has since been released on bail, and he appeared on Friday night’s episode of SmackDown.

Now, the former women’s champion has been hit with racist and violent comments, including one person telling her to take her own life over the incident, which she wasn’t present for. She is no longer on Twitter, and her Instagram profile also looks to have disappeared following the abuse.

Many of her fellow stars have taken to social media to defend her, with Mia Yim revealing they were reporting the abusive tweets. ‘Yea, you’re getting reported by all of us,’ she replied to one, shortly after sharing a simple message of support. She initially said: ‘Naomi, you are loved.’

Zelina Vega – who returned to WWE earlier this month after being released in November – also showed solidarity with Naomi. She wrote: ‘We love you @NaomiWWE sending you all the light, strength and positive energy.’ And Raw superstar Cedric Alexander added: ‘All my love and support to @NaomiWWE and her family!’

According to documents obtained by TMZ last week, Naomi’s husband Uso – whose real name is Jonathan Fatu – had readings of .202 and .205 from a breathalyser, and he was arrested in Pensacola, Florida on the misdemeanour. Florida’s legal limit is .08.

Two years ago, he was arrested in Detroit following a confrontation with an officer after his wife Trinity Fatu – known to WWE fans as Naomi – was pulled over.

For the latter, he paid a fine after pleading no contest to interfering with a government employee. Later in 2019, he was arrested for DUI again, but he was found not guilty.

Following the incident, he has since appeared on WWE television, where he, his twin Jey and their cousin Roman Reigns put on a united front as part of SmackDown’s current top storyline.

“Edge Was Going To End Up At AEW” – Matt Hardy Revealed