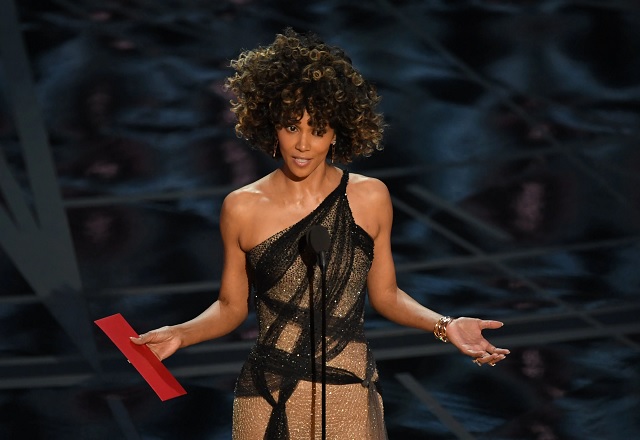 Halle Berry looked absolutely dazzling during the week in a striking outfit. The Bruised star rocked her naturally curly hair dyed a platinum blonde in a new photo from her tropical vacation.

The Die Another Day star was drinking some coconut milk straight from the source and she looked astounding in a slinky white top that featured several cut-out sections around her arms.

Halle smiled sweetly for the camera, and there was a hint of her sequined bikini top in view.

One of the main reasons she shared the photo was so that her fans could see her gorgeous curly hair – and she really suited the blonde curls. “Curls and coconuts,” she simply wrote alongside the snap.

Her followers quickly became obsessed with the image and they were quick to shower Halle with compliments and flame emojis.

One posted: “Makes me think about Strictly Business and how your hair was just flowing so lovely when you danced”.
One shared: “Look at my beautiful queen isn’t she beautiful,” while a third reminsced: “Love you Halle. Have a smashing time wherever you are”. And a fourth added: “Love your latest ensemble and look Halle.”

Captioning the breathtaking snap, she simply wrote: “Back in my happy place,”. Many fans were left speechless over her appearance. Some could only show their appreciation with heart emojis, while others were able to put some words together.
“Magical face in a magical place,” commented one. A second gushed: “Best PHOTO I’ve ever seen of my QUEEN of HEARTS. FAVORITE ACTRESS. I’m trying to capture as much of the beauty as possible.”

If there’s one thing for sure about Halle, it is that she is always switching up her hairstyles. Just three months ago, Halle was filming a new movie in London when she debuted a new hairstyle. We couldn’t help but notice how much she looked like her character Storm, from the X-Men movies.

Related Topics:Halle Berry
Up Next