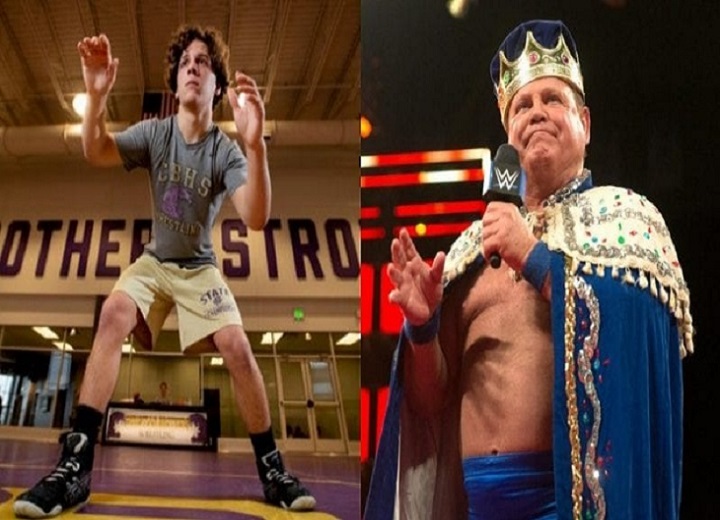 Blake Lawler, the son of the late Brian Christopher Lawler and grandson of Jerry “The King” Lawler, was interviewed by The Commercial Appeal to talk about how he is building his own wrestling legacy.

The 5-foot-4 135-pound high school senior says his connection to wrestling doesn’t come from his father or grandfather.

Blake says, “What inspired me wasn’t really my granddad or my dad, who were both in the WWE.

Really it was more my stepdad and stepbrother,” He continued, “They both went to Christian Brothers and wrestled here and I wanted to continue that tradition of CBHS wrestling.”

Blake says he doesn’t watch pro wrestling and some of his free time is spent watching the Pittsburgh Steelers and Memphis Grizzlies.

Jerry says he’s been watching Blake from afar. He said, “It’s really cool to see the wrestling thing. What it makes me think of is how proud his dad would have been of him.”

Jerry continued, ” We’re certainly proud of him as well, but Brian, that would have just made his life to know that Blake was sort of following in the footsteps.”

Blake doesn’t see things the same way as his grandfather and he said that he would rather blaze his own path and making his own name.

He said, “Everybody sees my name is Blake Lawler and thinks I’m exactly like Jerry because I wrestle, but that’s not why I wrestle. I want to create my own path.”

WWE wrestler Jerry ‘The King’ Lawler, revealed he recently suffered a stroke while having sex with his partner

It looks like Blake has no plans to get into professional wrestling because he says that his plan is to study biomedical engineering and he wants to go to medical school. He added that Rhodes College, Vanderbilt, Christian Brothers University, Alabama and Arkansas are schools he is considering.

WWE would probably be interested in talking with him since he’s a great amateur wrestler and they love to recruit athletes but it doesn’t look like Blake has any plans to become a sports entertainer.