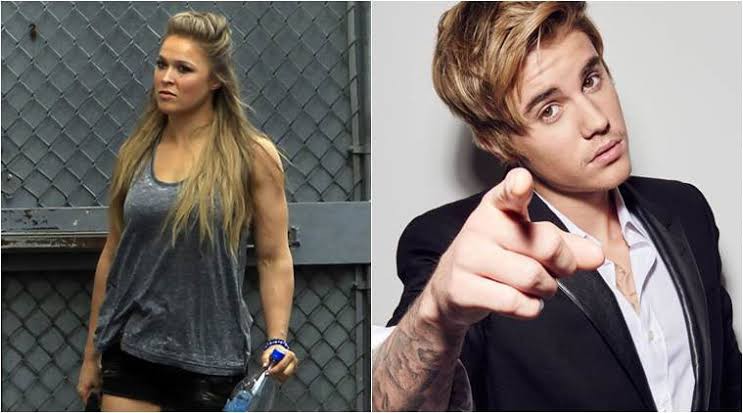 Ronda Rousey and Justin Bieber have a beef that goes back a few years. It’s tied up with family, and it’s not likely to disappear.

Former MMA athlete and WWE wrestler Ronda Rousey might be taking a break from the biz and public life in 2020, but going by past history, it’s unlikely Ronda “Rowdy” Rousey will be quiet and out of the spotlight for long.

Justin himself has a bit of a history of flirting with the idea of fighting and boxing.

He even took fighting lessons from Floyd Mayweather, so it’s probably not a coincidence that Rousey has openly snubbed Mayweather in public in the past, also due to his history of domestic violence. In June 2019, Bieber even challenged Tom Cruise to a fight.

Here’s a look at how these two celebrities’ paths crossed for the worse, and not the better.

RONDA AND JUSTIN – HE SNUBBED HER SISTER AT CANNES

Ronda went public with a beef she had with pop star Justin Bieber. According to reports, Bieber had brushed Ronda and her little sister off at Cannes 2014.

Ronda voiced her opinion in an interview with Cosmopolitan Magazine, where she claimed that Justin was “really rude” to her sister.

Bieber’s snub was directed at Ronda when she asked for an autograph for her 16-year-old sister Julia. “I’ve already taken a billion pictures today, OK? A billion,” Bieber told Ronda.

Then, he apparently took off. Rousey claimed her sister was in tears at his cold rebuff, and both siblings declared they were no longer beliebers.

“I’m not sure I’d want to hang out with him,” Rousey said.

JUSTIN BIEBER APOLOGIZES… OR DOES HE?

More than a year later, it seems like Rousey’s words still bothered Bieber. In November 2016, he apologized for the incident in an interview on Entertainment Tonight – or seemed to.
5 Wrestling Legends Who Are Surprisingly Poor — See Full Names…
“I guess, supposedly, she asked for a picture with her sister or something, and I guess I said no? But I don’t remember this happening so, Ronda, I’m sorry. Don’t kick my a**!” he said.

A few minutes later in the interview, however, he seemed to double down on dissing the MMA legend, who’d recently lost a fight to Amanda Nunes.

The loss was only the second of Ronda Rousey’s storied career in the UFC, and then the WWE.

WHAT’S NEXT FOR RONDA AND JUSTIN?

Ronda said she’s not “gratuitously violent,” in an interview with Cosmopolitan, and that’s good news for Bieber.
UPDATE: The Undertaker Upset With WWE Snubbing Wife, Michelle McCool… The Undertaker Responds Again…
There seems to have been a lull in their hostilities, but you never know with two volatile celebrities.

It’s not like Ronda wouldn’t be ready to rumble. She kicked off her athletic career with a bronze medal in Judo at the Beijing Summer Olympics in 2008, then blazed a trail by being the first female competitor signed to the UFC in November 2012.

In 2015, when the beef with Bieber first came up, Ronda had just won the ESPY Awards for both Best Female Athlete and Best Fighter. She was inducted into the UFC Hall of Fame in 2018 and ended her UFC career with a 12-2-0 record.

Ronda made the transition to the WWE at Royal Rumble 2018 wearing the late Roddy Piper’s leather jacket.

Alexa Bliss Fires Back At Fan Over Complaining About Her Tattoos — See Alexa Bliss new tatoos
At SummerSlam 2018, she won the Raw Women’s Championship and went on to defend her title until her first big WWE loss at WrestleMania 35. She retired at the end of 2019.

These days, she’s happy to take some time off and spend time at home with husband Travis Browne and her two stepsons, but many sports insiders credit her and others like Amanda Nunes for paving the way to what is now a hot women’s MMA field in 2020.

And Justin? His latest tour is in the process of changing venues due to slow ticket sales. Maybe a public beef is just what he needs right now.