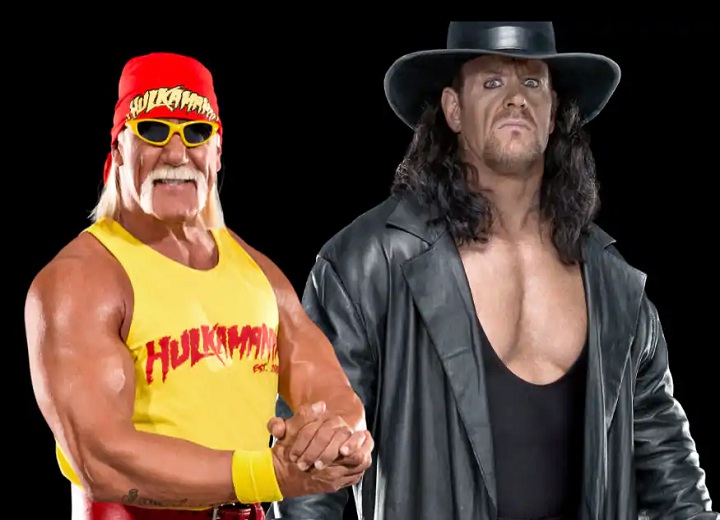 The Undertaker’s illustrious WWE career came to an end at Survivor Series, pulling the curtain on a 30-year run with WWE.

Tributes have poured in not just from those in the pro wrestling industry, but celebrities from other forms of entertainment and sports as well.

WWE Hall of Famer Hulk Hogan, who was one of The Undertaker’s earliest opponents, paid tribute to The Phenom, and also revealed a part he played in Undertaker joining WWE.
Hulk Hogan says he told The Undertaker to meet Vince McMahon

Hulk Hogan congratulated Undertaker on his WWE career and revealed that he had told The Deadman to meet Vince McMahon when they were filming the movie Suburban Commando.

“Amazing career the Undertaker has had, 30yrs of Main Events and always was nothing but money, I will never forget Taker on the set of Suburban Commando, I told him Vince needs to meet you,30 awesome years brother HH”

Amazing career the Undertaker has had,30yrs of Main Events and always was nothing but money,I will never forget Taker on the set of Suburban Commando,I told him Vince needs to meet you,30 awesome years brother HH— Hulk Hogan (@HulkHogan)

Hulk Hogan was the star of the 1991 movie Suburban Commando, where Mark Calaway, i.e. The Undertaker, played a role in the movie as well.

PWInsider dissected Hogan’s claims that it was him who directed Undertaker towards Vince McMahon:

“It should be noted that, according to the American Film Institute, Suburban Commando began filming on 9/24/90, which would be a eight weeks before Mark Calaway debuted at the 1990 WWF Survivor Series as The Undertaker.

Casting would have happened weeks to months before that. Calaway had left WCW, where he was competing at the time as Mean Mark Callous, in September 1990.

It’s entirely possible the claimed Hogan-Undertaker exchange happened, but just as possible Calaway was already known by WWF management due to his time in WCW.”

The Undertaker joined WWE in October 1990, just a few days before the filming of Suburan Commando began. The Phenom joined WWE after briefly wrestling in WCW.

‘Taker defeated Hogan a year after his debut to win the WWF Championship at Survivor Series 1991, his very first world title in WWE. Hogan eventually left WWE in 1993 and joined rival promotion WCW.

The Undertaker seemingly doesn’t have a good relationship with Hogan as Hogan claimed that Undertaker hurt him at Survivor Series 1991, which did not sit well with The Phenom.