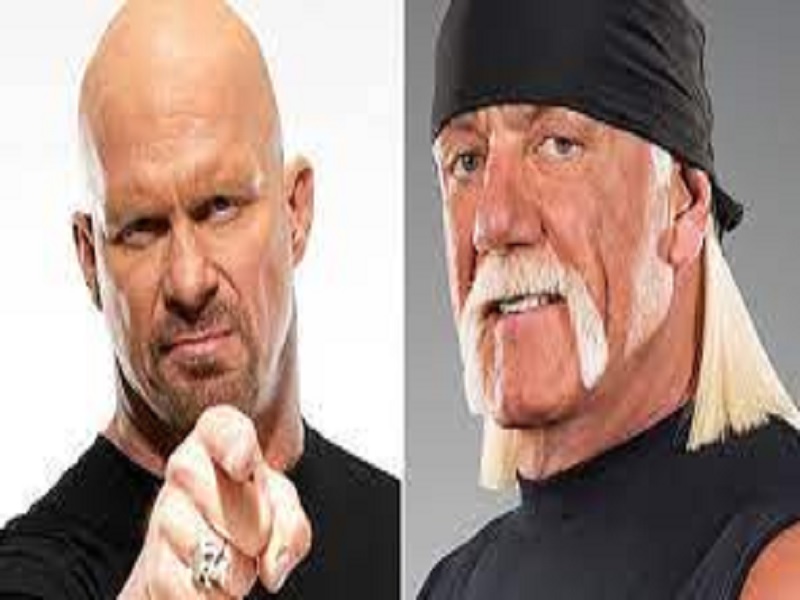 Stone Cold Steve Austin told WWE.com in an interview that he has no plans to, but in a chat with Rolling Stone that was also published today, he openly addressing the issue of Hulk Hogan and the Hulkster’s open pursuit of an in-ring payday with Stone Cold. That pursuit has even included calling the Texas Rattlesnake a coward for not agreeing to a match against the 61 year old Hogan:

The last time I talked to Hulk was at SummerSlam, but I didn’t even bring up the podcast because we were just sitting in the hallway. Now he’s been making the rounds calling me a coward, trying to get a match out of me [laughs], so I’ve not talked to Hulk Hogan.

Steve Austin on if he thinks Hulk hogan is serious or not: I think he’s doing both. It’s interesting. Maybe on the live show I’ll have a retort. So there’s a reason to tune in tonight, because I know people’s interest level has been pretty low for Stone Cold’s interview with Vince McMahon tonight…

He provides some background on how that came about after a few months of trying to schedule Vince for a regular Podcast One version of his show, and again promises to not take it easy on the Chairman. Stone Cold also gave a review of another figure who recently cameback – or in his case, finally debuted in – WWE. Another icon of the Monday Night War era that launched Austin to superstardom, Sting.

I saw him at the WWE 2K15 panel that I hosted and I was excited to see him there because I’m a big fan. He’s had a hellacious run. Some people didn’t consider him to be Hall of Fame worthy because of the fact that he’d never been in WWE before. To me it’s a no-brainer. When I came to WCW he had been there for several years and was the top guy, so to finally see him come in, dressed in the black and white, I was blown away.

The face-to-face with him and Triple H, they just let it build and build. Triple H tried to sell the big right hand, block, there’s the kick and the damage is done, then he hits his finish. I loved it. I’m a fan of good stuff inside the squared circle and it was a good story. The Authority had really built how they needed to win that night in a really long-winded promo by Stephanie McMahon and Triple H. They were setting the table for Sting. All of the guys in that match worked their asses off, and I really enjoyed the work between Seth Rollins and Dolph Ziggler as they went into the finish.