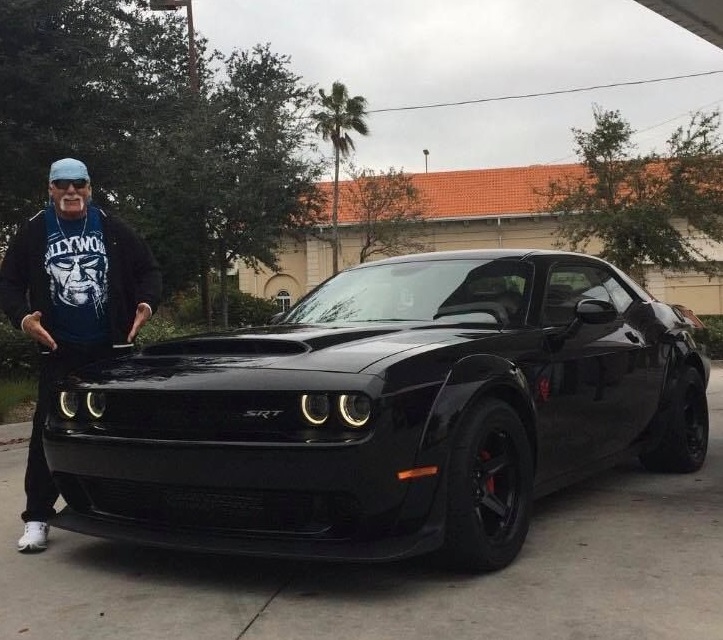 The Hulk hogan is know as one of the most successful wrestlers in the world having worked for the world wrestling entertainment for years and having a net-worth that’s mind blowing.

Hulk hogan is not just a wrestler, as report has it that he features in movies too. He is a proud entertainer and an ambassador. hulk hogan has his simple ways of spending money and one of those ways is purchasing exotic cars worth thousands of dollars.

Below, we will be displaying the cars as they are in the garage of the superstar hero and legend.

The muscle cars that Hogan owns are fun, but the Dodge Charger can’t accommodate the entire Hogan family when they commute together. To transport his family, Hogan uses a Chevrolet Tahoe. Instead of showing off his muscle cars at the gym, The Hulkster uses the powerful SUV.

The car has a 5.3-liter engine with a six-speed shiftable automatic. Considering Hogan doesn’t own the latest model, his Tahoe was priced at around $40,000. The car is tough as nails like Hogan.

Who said that money couldn’t buy class? Buy yourself a Rolls Royce, and many people will think that you have class. Hogan wanted to show that he wasn’t all about speed but also about luxury and sophistication, so he bought a Rolls Royce.

Cameras spotted Hogan hovering over a Rolls Royce Phantom in the parking lot of the Olympic Auditorium. Hogan lost money and some of his vehicles after a divorce from his wife, Linda. It seems that the Rolls Royce was one of the vehicles that departed from Hogan’s garage after the divorce.

The Hulkster takes great pride in showing off his masculinity, and what better way to do that than to cruise around town in an H1 Hummer? The Hummer became a civilian vehicle when General Motors wanted to cash in on the hype.

The car was impractical for daily use, as drivers struggled to keep it in road lanes and finding suitable parking was a nightmare.

If the bulky frame of the H1 Hummer wasn’t bad enough, then the high fuel consumption was the final nail in the Hummer’s coffin.

It should be obvious by now that Hogan is a fan of the Dodge Challenger. He wasn’t satisfied with having only the Hellcat, so he also purchased the Demon.

Hogan can expect a tremendous amount of power from the Demon, as the massive engine is capable of spurting out 808 horsepower and reaches a top speed of 168 mph.

The car needs only 2.6 seconds to reach 0 to 60 mph. That is enough power to quench any adrenaline junkie’s thirst. The Demon provides plenty of performance that even Hogan’s fast lifestyle cannot surpass.

what makes Hogan’s car more special is that Hogan ensured everybody knew that it was his car. Hogan named the car “The Hulkster” and ensured that it was covered in his traditional red and yellow colors. The car has a ten-cylinder engine mated to a six-speed transmission.

When the car came out in the 90s, consumers could purchase it for around $55,000, according to Car and Driver. The engine pumped out 400 horsepower and needed just over four seconds to reach 0 to 60 mph.