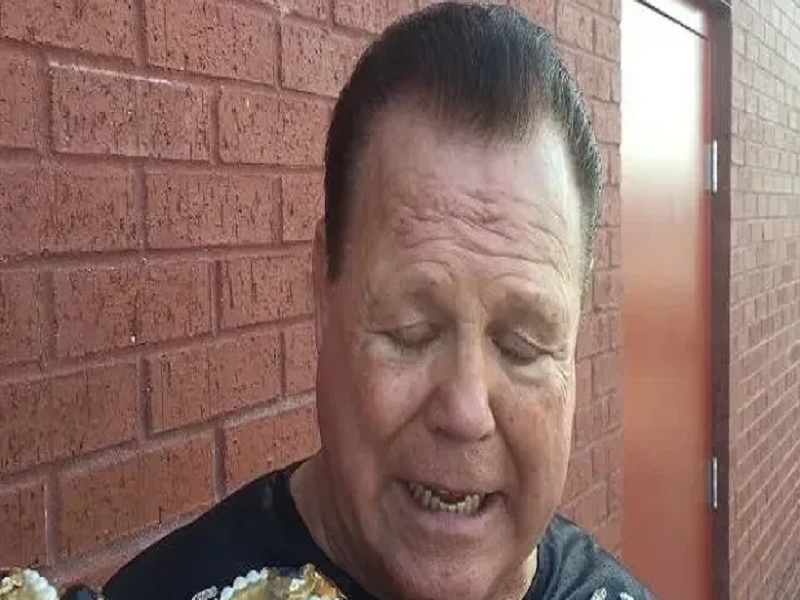 WWE legend Jerry ‘The King’ Lawler,  reveals he suffered a STROKE while having sex with his partner, 31.

The 70-year-old heavyweight told his Dinner With The King podcast he had a stroke after he and partner Lauryn McBride were ‘expressing love for each other in a certain way.’

His latest medical episode comes six years after he went into cardiac arrest live on air during Raw in 2012.

Lawler said: ‘I got up and I said something to Lauryn and I didn’t really feel anything, and she said, “What did you say?” And I realized then that whatever I said didn’t sound right, and then she looked at me — we made eye contact — and she said, “Oh my God, Jerry, go look in the mirror.”‘

He said he was unable to speak. ‘I walked around to the bathroom and I look in the mirror, and the whole right side of my mouth is drooping all the way down to my chin.’ Lauryn apparently panicked and said: ‘Oh my God, you’re having a stroke.’

He said: ‘We live about five minutes from the Baptist East hospital in Memphis. She didn’t even want to call an ambulance – she said just get in the car and she figured she could get me there before an ambulance.’

After being examined by doctors they discovered he had a hemorrhage in his brain. He was immediately placed in an intensive care unit. He couldn’t speak for over two days, however, he has now made a full recovery and even attended the last WrestleMania.

During the weekend he hosted the WWE Hall of Fame ceremony, appeared at WrestleCon, and also took part in calling the Andre the Giant Memorial Battle Royal. In 2016 Lawler and McBride were arrested on domestic violence charges.

They were both charged with domestic assault after an incident at Lawler’s East Memphis home.

According to an arrest affidavit, when police arrived McBride told officers that she and Lawler got into an argument that turned violent. McBride claimed Lawler held her against the kitchen counter and then hit her on the left side of her head and pushed her against the stove.

She also said that Lawler went upstairs and got an unloaded pistol that he put on the kitchen counter and told her to ‘go ahead and kill yourself.’

Lawler said they had an argument and it turned violent when McBride scratched him on his face, threw a candle at him and kicked him in the groin.

He claims McBride was intoxicated and that she was the one who brought the gun in the kitchen.

Jerry Lawler suffered a heart attack. It was both uncomfortable and concerning.

Wrestling legend and World Wrestling Entertainment commentator Jerry “The King” Lawler was rushed to the hospital after he collapsed and suffered a heart attack at a live televised show.

The WWE issued a statement Monday night after “Raw” went off the air in Montreal: “Jerry “The King” Lawler suffered a heart attack while commentating during last night’s broadcast of Monday Night Raw in Montreal. We are hopeful Jerry makes a full recovery and returns to WWE in the near future. Our thoughts are with Jerry and his family.”

Broadcast partner Michael Cole told the viewers that the situation was “serious,” but Lawler was breathing on his own.

“This is not part of tonight’s entertainment,” Cole said. “This is a real-life situation.”

During a tag-team match, Cole and Lawler’s voices became absent from the telecast. Fans in the audience began to rise from their seats and direct their attention to the broadcast table at ringside while the cameras remained focused on the action in the ring.

Cole resumed announcing the match before informing fans of the situation later in the evening.

Cole said Lawler fell out of his chair and doctors rushed to the announcer’s table before a stretcher carried Lawler to the backstage area where he received CPR. Cole said Lawler was responding well to tests and would be given a CT scan in the hospital, and “in typical Jerry Lawler fashion, he’s fighting hard.”

Lawler, 62, who primarily does announcing work for the company, does occasionally step into the ring to wrestle. Lawler became briefly involved in a match earlier in the program before returning to do commentary.

Lawler became a star in wrestling during the 1970s and 1980s in his hometown of Memphis, Tenn. He received mainstream attention after his scripted feud with comedian Andy Kaufman during the 1980s. Lawler played himself in the 1999 Kaufman biopic, “Man on the Moon.”

Lawler was inducted into the WWE’s Hall of Fame in 2007.

“Oh My Gosh! Vince McMahon is going to cry” – WWE Hall Of Famer Reveals How He Made the boss Cry