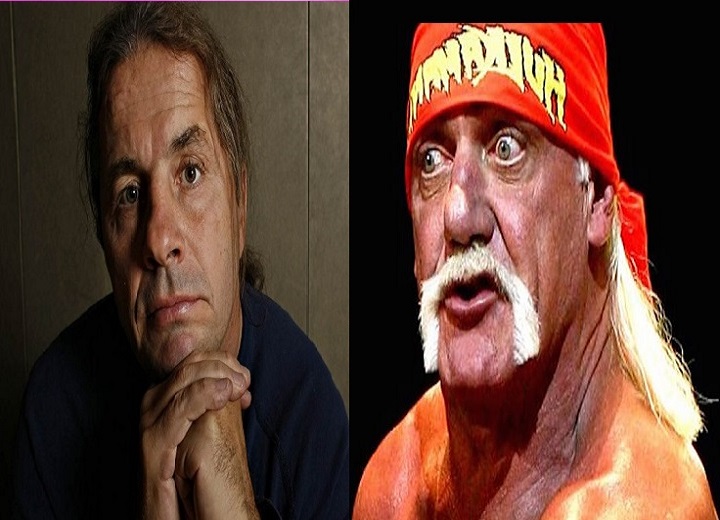 On recent episode of Confessions Of The Hitman, WWE Hall Of Famer Bret ‘Hitman’ Hart talked about a number of interesting professional wrestling topics including he involvement in helping fellow WWE Hall Of Famer Hulk Hogan with his wrestling skills.

Hart, who previously stated that he would give Hogan a rating of 2/10 for wrestling skills, claimed that he helped ‘The Immortal One’ a lot with his wrestling skills in the early days. According to ‘The Hitman’, Hogan did not even know how to hit the ropes when they met.

“I knew Hulk from Japan,” Hart recalled. “I wrestled him in Atlanta, Georgia when I first started. I actually helped him a lot when he first started with wrestling.

In Hart’s estimation, Hogan could only do a bear hug, clothesline, and body slam prior to going to WWE.“It’s easy stuff to do strongman stuff,” Hart professed. “It’s like, pretty elementary stuff.

Hulk Hogan could do a good bodyslam, a good clothesline, and a bear hug. And that’s his match back then anyway. And he improved slightly by the time he got to WWE.”

Hart said that he tried to get Hogan to go to train in the infamous Dungeon in Calgary, Alberta, Canada. Apparently, Hogan later regretted never taking Hart up on the offer.

Hart recalled going to a WWE tryout in 1984 along with Dynamite Kid, knowing they were better wrestlers than most big names at the time, but lacked the promo skills of a Hogan, Piper, or Paul Orndorff.

“I remember me and Dynamite Kid, in a million ways, we were far superior wrestlers than many of the wrestlers who were big names then, but on the talking part, we couldn’t even lace their boots up.”

Hart continued, “I remember Hogan would give me goosebumps up my arms when I’m sitting in the room listening to him about the pythons and the ‘let me tell you something, brother’.

Hart acknowledged that Piper really helped him to develop mic skills. Piper told Hart that he is a great wrestler, but had to learn how to talk to make it big.

In Piper’s view, wrestling skills and promo skills are really 50/50, as no one is going to pay to see a wrestler if he cannot talk in the first place.

“A guy that helped me a lot with that department, like working to improve, I remember Roddy talking to me, ‘you’re a great wrestler, but you’ve got to learn to talk because you won’t ever make any money if you can’t talk.’

And I remember [responding], like, ‘the wrestling is more important.’” Hart added, “[Piper] was like, ‘no, they’re about 50/50. If you can’t do one, you’re not going to get anywhere with the other.

How ruthless Vince McMahon told legends Hulk Hogan and Bret HartBeing a great wrestler means squat! You’ve got to be a good wrestler and you’ve got to know how to talk.’”