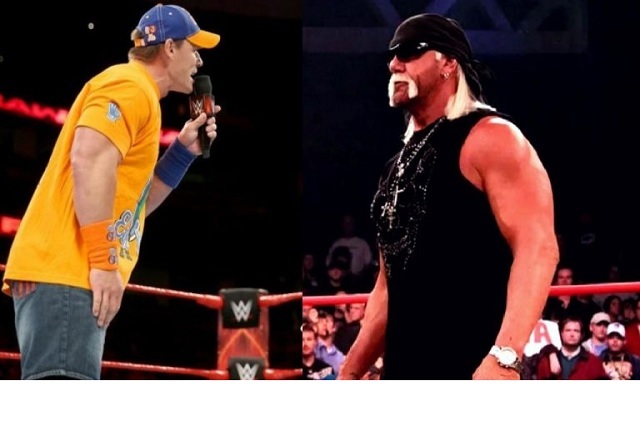 Hulk Hogan once revealed that he was going to face John Cena for the title at the show of shows back in the late 2000’s.

WWE fans have seen several Wrestlemania dream matches over the years. They have seen the biggest stars of WWE from different generations facing new-generation superstars at the grandest stage of all. But there is one match that fans could never see. It is none other than the cenation leader John Cena going against the Hollywood Hulk Hogan.The dream match of Cena vs Hogan almost happened at Wrestlemania 25

The match between the two biggest WWE stars, John Cena and Hulk Hogan, almost happened in the year 2009. The Hulkster appeared in many interviews in 2009 and talked about this match. Hogan revealed that he was about to wrestle Cena for the World Heavyweight Championship at that year’s WrestleMania.

The only reason for that not happening was Hogan suffering an injury.Vince McMahon and Hogan talked about making this match official

Hogan also revealed that he was in talks with WWE Chairman and Owner Vince McMahon about his wrestling match with Cena. But unfortunately, the Hulkster met a back injury and had to go for emergency surgery. Therefore, the match was called off and the WWE universe never got to see this dream match.

“Vince and I were talking about how much involvement I wanted to have in Wrestlemania, and if I wanted to keep wrestling, and out of nowhere my back just got really crazy. I went in for an MRI and I had to have some emergency surgery that threw me out of the game. I kind of flipped out about it, I thought I’d be the main event this year.”

Injuries in pro wrestling are painful not only for the wrestlers but can be heartbreaking for the fans as well. The WWE Universe has been robbed of multiple dream battles because of injuries over the years. John Cena vs Hulk Hogan at WrestleMania 25 is one such battle that actually was won by an injury.

Although John Cena once interrupted Hogan, Michaels, and the Nature Boy on an episode of Raw.WWE could never book the match again because of the fact that Hogan had not wrestled a match for WWE since 2006.

Eventually, John Cena ended up facing Edge and The Big Show at WrestleMania 25 in a triple threat match.

Related Topics:Big Show at WrestleMania 25 in a triple threat match.John Cena once interrupted HoganJohn Cena vs Hulk HoganMichaels
Up Next