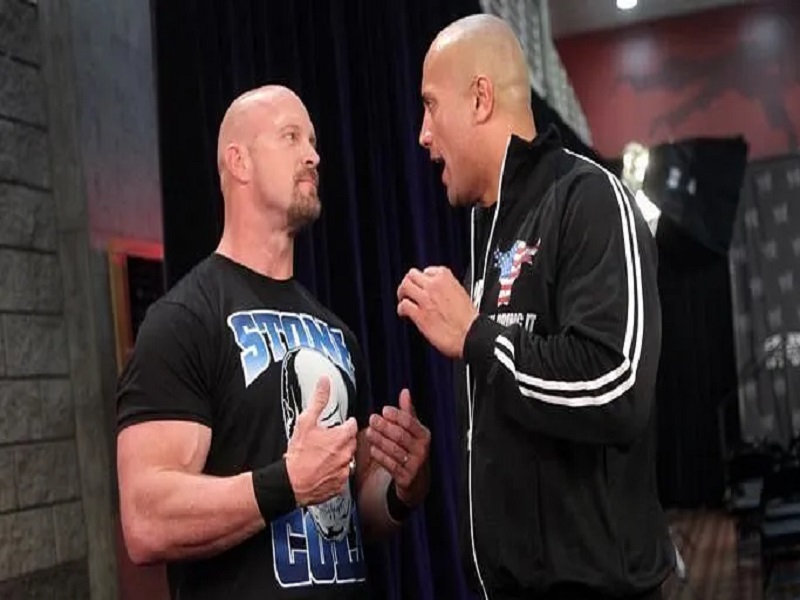 Stone Cold Steve Austin and Dwayne ‘The Rock’ Johnson,  are two big names in the wrestling industry. Even though it appeared to many fans  that they were both enemies, in real life Steve and Johnson are good friends.

The Rock recalls a “seismic shift” as professional wrestling moved “away from the cartoon era, the superhero era… into an edgier, reality-based program.”  Also, Steve Austin, who’d been competing since 1989, was in his prime, but Johnson’s presence didn’t go unnoticed.

Remembering a great moment6 i the wrestling industry, Steve Austin Said, “I just remember watching him starting to gain momentum and starting to establish a relationship with the crowd.” “He’s starting to get over. There’s something here. I need to watch this.”

Steve Austin said as much to The Rock, who shares that Austin told him “something to the effect of, ‘There’s something’ there, kid.’” Although Johnson knew, at the time, that they were both “fighting for the exact same thing”  which was the top spot in the WWE.

Steve Austin further said that, their intense competition “was out of so much love and so much respect” for one another. He even refers to Austin as “a big brother” further describing their chemistry as a “special thing that you just feel.” They even somehow knew exactly what each other was going to do at all times.

When it was time for Steve Austin to step away from the ring in 2003, he he personally picked The Rock  Johnson to be his final opponent at March 2003’s WrestleMania XIX in Seattle.

Once Johnson officially won the match  and while both men were still lying in the middle of the ring  he lowered his head to Austin’s ear, told him he loved him and thanked him for all he’d done for him.

“I felt like that was the time to tell Steve because there’s no other moment in our world where we are as raw, open and vulnerable than in that moment right there,” Johnson says. “When the 1-2-3 happens it’s just two men who have gone on this incredible journey.”