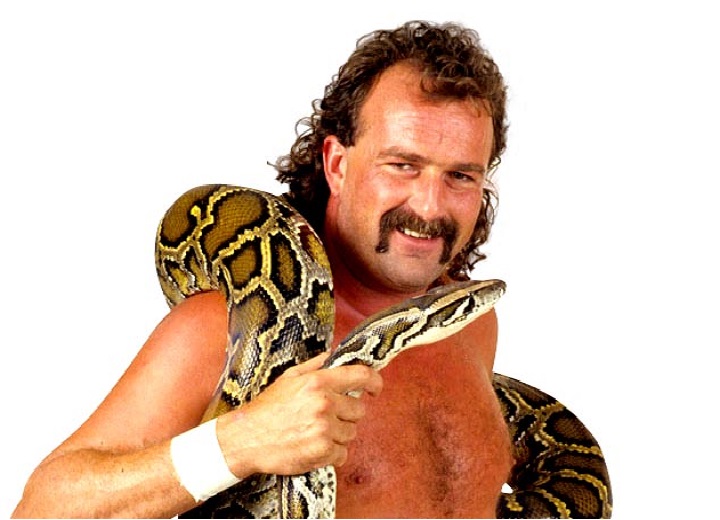 On a recent episode of the DDP Snake Pit Podcast, Jake “The Snake” Roberts spoke about his infamous “snakepit” segments with Hulk Hogan. Roberts revealed that he got so upset with Hogan over the size of his pythons that one time he got so upset he hit a DDT on him that split Hulk’s skull open.

“We did a thing on snakepit and he’s talking, I’m like, ‘well what do you think of a python?’ He’s like ‘the biggest pythons in the world are right here,’ and he does his sh-t,” Roberts said. “And you know, it went on and I’m like, next week we’ll have a tape measure. We’ll see who’s got the biggest pythons’. So next week they’ve got a weigh set up out there for Hogan to pump up with. So we measured his arms, it was a gimmick tape.

“21, I measure the snake, 21 and a half. So Hogan lays down on the bench and starts working out. Measure again, 21 and a half, it’s the same as the snake. He goes, ‘brother, these pythons are going to pump up a little bit more’. And he starts to work out again. Well, I’m pissed off, so I DDT him, which had the same result that it did with Steamboat. Split his skull, you know, he’s laying there bleeding, I walk off the set.”

During a previous episode of the podcast, Jake Roberts spoke about being offered the role that Pat Patterson held with the WWE for decades by Vince McMahon, who later rescinded the offer. The WWE Hall of Famer also spoke about wrestlers using his finishing move as a regular move, saying he has no issue with the DDT as a transitional move. spoke about Vince’s reaction to his segment with Hogan on the “snakepit”, revealing he was very happy with Roberts until he revealed the fans cheered him over Hogan.

“I walk off the set to the back, Vince grabs me and hugs me, ‘oh Jake this is going to be magnificent! Oh God, the money you guys are going to make’,” Roberts mentioned. “And I’m sitting there going, ‘finally, finally my dream man, it’s happening, thank you, Jesus. I’m pissing myself. I’m so happy. He says, ‘stay right here with me’. I go, ‘what for?’ He goes, ‘the people, they’ll start chanting Hulk, Hulk Hulk. He’s going to come to his feet, he’ll rip his t-shirt off, he’ll scream, beat his chest, and he’ll come looking for you. We’re talking about going straight to the bank with all of this. Jake, thank you’.

“And he shakes my hand. We stand there and we stand there. Then Vince starts to look around like what the hell is going on. He looks out, Hogan’s waiting for the people to start chanting. The people did. They started chanting, ‘DDT, DDT’. And Vince went, ‘you’re screwed’. ‘What do you mean I’m screwed?’ He goes, ‘that’s not what we want.”

“The Snake” said he and Hogan were given a few chances to sell out shows and reveals what the results were. Jake Roberts said no matter how much he and Hogan sold out shows, it was all about marketing and marketing WWE’s biggest star at the time.

“So they gave us a couple of shots, they sent us to Portland, Maine, sold out, set the record,” Roberts mentioned. “Went to Montreal, sold out when it hadn’t been sold out in years there before. Sold it out, turned them away, no cameras. Here’s what happened in the matches. ‘DDT, DDT’. Vince says, ‘that’s it, no more’. ‘What do you mean no more, we’re sold out, we turned away people’.

He goes, ‘I don’t give a d-mm, that’s not what it’s about’. How much better can you get than a sell-out? The WWE didn’t care about sell-outs. It’s all about marketing, that’s where the money’s at. Vince used to say he didn’t give a sh-t how many people came to the building.”

WWE Legends’ Obsession With Hulk Hogan’s Success Led to His Downfall: “I Have Lost My Whole Life and I Feel I Deserve What He Has”