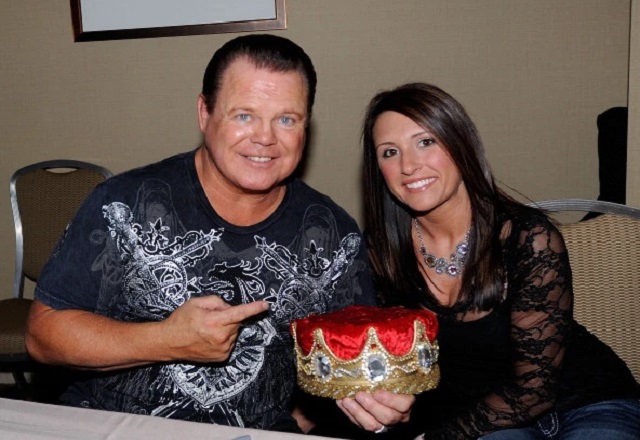 The 70-year-old heavyweight told his Dinner With The King podcast he had a stroke after he and partner Lauryn McBride were ‘expressing love for each other in a certain way.’

Lawler said: ‘I got up and I said something to Lauryn and I didn’t really feel anything, and she said, “What did you say?” And I realized then that whatever I said didn’t sound right, and then she looked at me — we made eye contact — and she said, “Oh my God, Jerry, go look in the mirror.”‘

He said he was unable to speak. ‘I walked around to the bathroom and I look in the mirror, and the whole right side of my mouth is drooping all the way down to my chin.’ Lauryn apparently panicked and said: ‘Oh my God, you’re having a stroke.’

He said: ‘We live about five minutes from the Baptist East hospital in Memphis. She didn’t even want to call an ambulance – she said just get in the car and she figured she could get me there before an ambulance.’

After being examined by doctors they discovered he had a hemorrhage in his brain. He was immediately placed in an intensive care unit. He couldn’t speak for over two days, however, he has now made a full recovery.

According to a report by Dave Meltzer, Samoa Joe has joined the Monday Night Raw commentary team as a permanent replacement for Jerry “The King” Lawler. Lawler was called out for racially insensitive comments a few months back concerning Akira Tozawa.

Joe replaced Lawler the week after the incident to get the heat off of him, but Lawler returned shortly after. Joe also replaced commentator and NXT performer Dio Maddin after Maddin became injured by Brock Lesnar back in December of last year.

Joe has done short-term and one-off appearances on commentary throughout his in-ring career. As he is not yet medically cleared to wrestle, this could be extremely beneficial for his career–it’s a way to keep him on TV while still allowing him to recover and not lose his “spot” so to speak.

Jerry “The King” Lawler, who incomprehensibly returned to commentary Monday night on Raw, is facing backlash for a racially insensitive remark he made while calling a match between Akira Tozawa and Austin Theory.

Racially insensitive nicknames are nothing new for heel commentators in wrestling, which is clearly what Lawler is going for at his advanced age.

In fact, these type of remarks aren’t even foreign to Lawler himself, who has been known to refer to Hispanic Superstar Humberto Carrillo as a “jumping bean.”

Of course, Lawler’s comments hearken back to WWE Hall of Fame wrestler, and legendary heel commentator, Jesse “the Body” Ventura, who famously coined the term “flying burrito” in reference to Tito Santana.

This past November, legendary wrestling manager Jim Cornette resigned from NWA Powerrr after refusing to apologize for reusing and old line about buckets of chicken and Ethiopia.

It’s unfair to dismiss Jerry Lawler as a racist after piecing together a series of tone-deaf comments. There are bigger fish to fry when it comes to that discussion, especially in an industry crawling with noted racists who operate guilt-free in private.

But Lawler’s seemingly irreplaceable presence on Raw ties into the vision of 74-year-old Chairman Vince McMahon, whose insistence on maintaining a middle-aged status quo at the top will continue to alienate young viewers and viewers of color.

Lawler’s presence on Raw alone is controversial in its own right. With the novel coronavirus (COVID-19) continuing to peak, and as the world looks to flatten the curve, elderly individuals and those with preexisting conditions are at the highest risk for severe illness from COVID-19 per the Centers for Disease Control (CDC).

Jerry Lawler is both.

CDC cautions “people who are 65 years or older” and “people who have serious heart conditions” to take added measures in staying safe during these times. These groups at the highest risk for severe illness from contracting COVID-19.

As Lawler continues to risk his health during a time where immunocompromised top star Roman Reigns has admirably chosen to self-quarantine, the wrestling legend is hardly being asked to do so against his will.

Lawler has championed avant garde conspiracy theories and philosophies against the coronavirus, often dismissing the global pandemic as a media creation.

“I just think that the media is blowing this thing—is creating this panic,” Lawler said during an appearance on “Cerrito Live” (h/t Wrestling Inc).

“You know you can’t find toilet paper anywhere. That’s the main thing the coronavirus causes you is to make you go to the bathroom a million times a day or something. Other than that, I still think I still feel like this is blown out of proportion and it’s a media created panic.”

When asked about traveling during the pandemic during the mid-March appearance, Lawler stated plainly:

How Jerry Lawler, wrestling inspired Memphis football to bring back its ‘Turnover Belt’