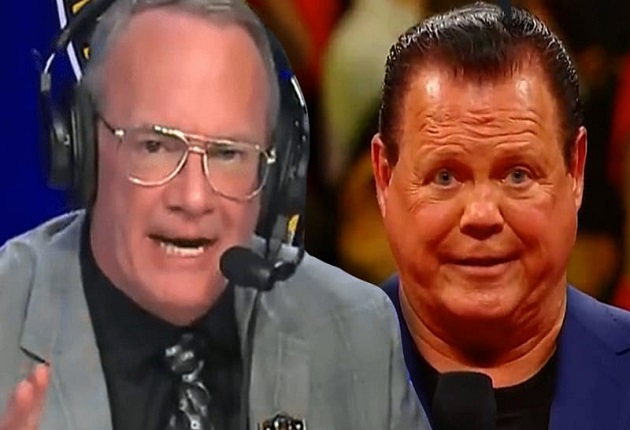 Jerry “The King” Lawler has been at the center of some negative attention after making an off-color joke on Monday Night Raw. However, Jim Cornette has a different point of view, and he didn’t explain it politely.

During the match between Akira Tozawa and Austin Theory, the WWE Hall of Famer referred to the Japanese superstar’s moonsault as a “Ramen Noodle moonsault,” which some fans interpreted as racist.

However, Jim Cornette has a different point of view, and he didn’t explain it politely. The former WWE employee took to Twitter a few days ago to share his views on the matter.

According to Cornette, Lawler’s critics are too easily offended and questioned how they are able to get by in day-to-day life without breaking down.

“So now people are mad at @JerryLawler for telling a joke. Now I understand why modern wrestling sucks, because most modern wrestling fans are such whiny little p*ssies they don’t DESERVE good wrestling. How do these people go out in public without breaking out in tears?”

The comments section was generally supportive of Cornette’s tweet, but one Twitter user shared a video featuring clips of several like-minded jokes Lawler has made about superstars in recent months.

In the video, Lawler said that both sides shot at Lacey Evans while she was in the Marines and joked about Ric Flair being dead. He also made stereotypical jokes about Andrade and Kairi Sane.

Lawler’s jokes won’t shock anyone who is familiar with his body of work. Some would even argue that he’s toned it down in recent years, as he’s confined to the rules of WWE’s PG product.

However, some fans are questioning whether the Hall of Famer’s humor is outdated, as his latest comments have brought some negative attention to the company.

Cornette is another wrestling veteran who’s faced heat for telling offensive jokes while doing commentary. As we previously reported, he was fired from the NWA last year after making a racist joke during a match, which resulted in him being called out by Mark Henry.

Cornette never apologized for his comments because he meant them as a joke, so it’s unsurprising to see him come to Lawler’s defense.

Both he and Lawler also come from an era of wrestling where heels got heat from fans by trying to offend their sensibilities, and they appear to be stuck in their ways.

Lawler hasn’t responded to the upset fans at the time of this writing, and it remains to be seen if the company will discipline the commentator.