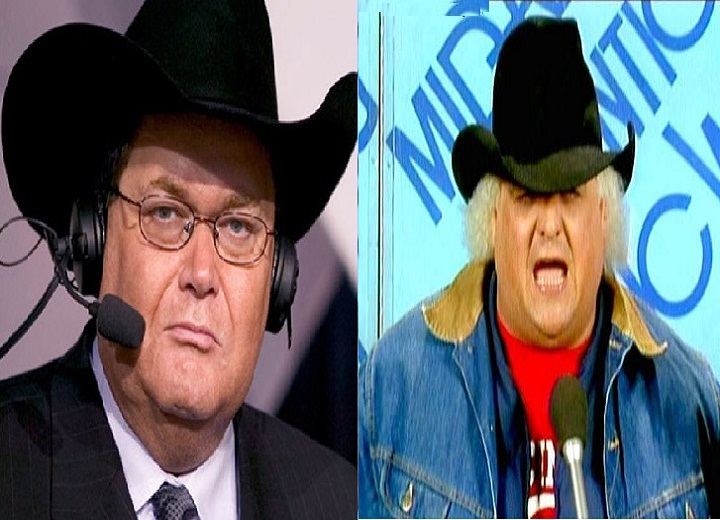 Jim Ross has discussed sharing the broadcast table with the legendary WWE Hall of Famer, ‘The American Dream’ Dusty Rhodes.

Speaking on his Grilling JR podcast, Ross was detailing WCW’s WrestleWar 1991. An event that would see Jim Ross share announcing duties with Rhodes. Ross recounts their time together at the commentary desk:

“I know he wanted to keep his TV presence established and [commentary] was one way of doing it. I had a variety of partners in WCW and all of them were good, quite frankly.

So, I think he liked that rub without sounding so egocentric on my end. He’s sitting in a good chair. That chair facilitated a lot of guys to get exposure and so forth.”

“Our first outing was not good because he talked too much. And that sounds really, really s****y of me to say that because I talk all the time but I’m the play-by-play guy. I gotta set the table and keep the rudder in the water.”

JR would then segue into issues he has with commentary and how he would on occasion try to explain them to Dusty:

“I have a big issue with commentary to this day, I’ve had it forever. One is talking through false finishes. How do we know it’s a false finish and not the finish unless we know the finish?

So all of a sudden we just talk through those false finishes because we know that’s not the finish…The other thing is the frigging use of pronouns.

I know we make fun of Vince [McMahon] about that. One of the best things Vince taught me in commentary was do not overuse pronouns – ‘he hit him, he did it again!’ Who the f**k is ‘he’?”

“I tried to explain that to Dusty. He got it quite frankly and our second broadcast was better than the first broadcast but still with too many pronouns in my opinion. But he did fine. Dusty had great charisma.”

Jim Ross: “Our first outing was not good because Dusty Rhodes talked too much”