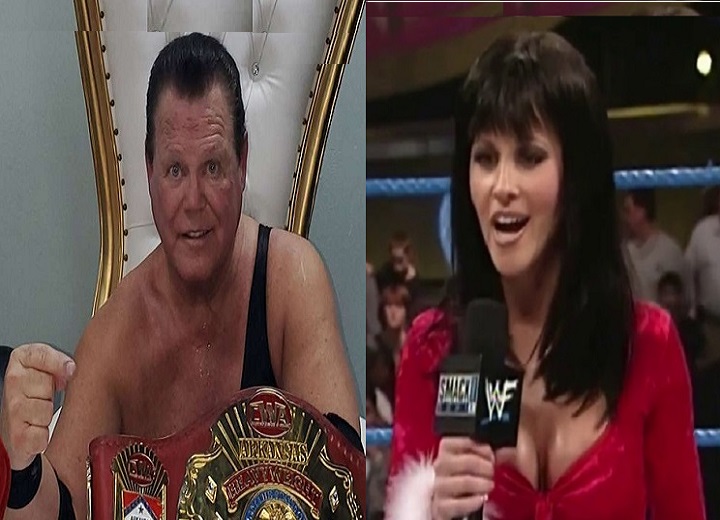 On the most recent Grilling JR, Jim Ross looked back on being told he had to release Stacy “The Kat” Carter and her then-husband Jerry Lawler quitting the company in protest.

As “The Kat,” Carter was one of the more popular and controversial members of the women’s roster from 1999 to 2001. She gained notoriety for flashing the crowd on camera more than once and was involved in some major angles of the Attitude Era.

King Cobra in the ring, Jimmy Kimble vs Jerry Lawler

However, there were people backstage who complained about Carter’s negative attitude. Creative was reportedly frustrated with her and found her difficult to deal with, as she would apparently argue and push back on the things they wanted to do.

After Carter was released in February of 2001, Lawler left the company in protest. They would separate later that year and Lawler would rejoin WWE in November.

Highlights from the discussion, and the full podcast, are below:

On his friendship with Lawler and Carter: “Well you know, here’s the thing about it. And maybe somebody’s gonna say, ‘Well JR, sometimes had relationships with the guys on the talent roster that were unhealthy, because he was too close to some of them.’ I’ll take my chances on that, quite frankly. And those that think that may have a point to some degree.

But I’ll take my chances on that deal … But you know, Jerry and Stacy, I just thought that they were a great couple.

You know, Jan and I went to their wedding in Las Vegas that, I think Charles Barkley actually paid for their wedding.

So Charles is a big friend of JR and the King back in those days, and we had dinner with Charles after a Phoenix Raw. Their wedding came up in conversation, and Charles volunteered to pay for the wedding, and of course Jerry, ‘All right! I’m gonna save a couple of bucks here!’ So we were friends with them on a personal level outside of wrestling.”

On why Carter was let go: “So the issue was that, as I remember it because I had never had one person come to me and say, ‘Man, JR, you gotta talk to Stacy. She’s just busting our balls, you can’t work with her and she knows a better way to do anything.

And she’s got a little taste of the spotlight now, she’s being carried away with it’-type thing, whatever. Nothing. It was just that Vince came out of the blue, said, ‘You know, I’m getting too many complaints about Stacy and I’m not gonna tolerate it. And I want you to let her go today.’ Boom, it was that quick.

So, I didn’t have any — I tried to discuss it. But basically some of the producers, the writers, whatever. I think they were the culprit in this matter.

Because for whatever reason, she was challenging their authority or their decision-making, or their creativity or whatever. Anyway, that was the reason I was given.”

So you’re a soldier, you follow the damned orders. You take the guy’s money, you do what he says. So I did. And I even told Jerry, ‘Well maybe, do you wanna tell her? I’ll tell her, don’t get me wrong, but maybe it comes easier from you, I don’t know.

I want to make this as easy for both of you as I possibly can, tell me how I can help do that.’ So I think he told her, as I recall. So that’s kind of how that deal worked.”

On Lawler quitting in protest: “I thought he might want to take a few days off to show support for her. But I didn’t know he was gonna quit altogether. But for Vince, it wouldn’t have mattered anyway.

I think Vince was probably thinking further ahead than I, and decided, ‘If he bolts, he bolts.’ So that’s where we are. That’s kind of how that deal went down. It was a bad day.”

On Carter: “I think the world of Stacy today. She does a lot of stuff with rescue animals, and she has a hair salon and spa-type thing in Dallas. So she does a good job, in her post-wrestling life.

She separated herself from it for her own benefit and mental health, I think. But she never really deserved to get canned, in my view. And again, I may be overbiased, I may be wrong. But I always thought that she got kind of a raw deal on that thing.”