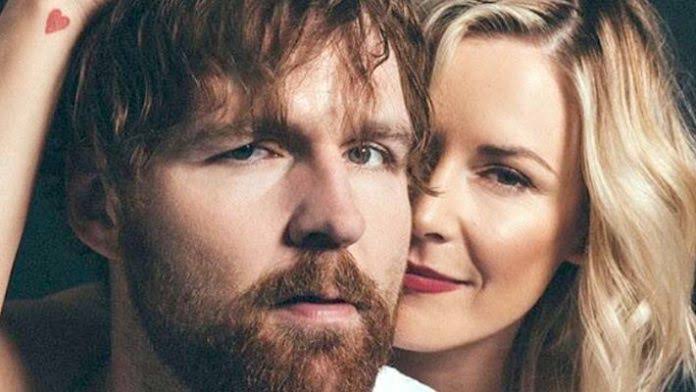 Jon Moxley announced tonight on AEW Dynamite that his wife, Renee Young, is expecting a child.

Jon Moxley was cutting a promo backstage on his upcoming December 2nd bout against Kenny Omega, where he described his hectic schedule.

The AEW World Champion attributed advice he received from his father, who always told him that they were the “good guys,” to how he is able to navigate through all his responsibilities. Within all that, he briefly mentioned that his wife is pregnant.

“And now the whole world is bearing down on me,” Moxley said. “My body feels like hell, I can’t even get out of bed in the morning. I have a pregnant wife at home.

I’m holding two titles on two different continents. I got challengers coming from every which way, what do I do? I know what to do. We’re the good guys.”

As Tony Schiavone noted on commentary, Moxley just about buried the lead when it came to the exciting news, but given the quiet nature of his and Young’s marriage, it is not out of the ordinary.

This will be Moxley and Young’s first child together. The couple first met in WWE, and were quietly married in 2017. The two have since moved on from the company, where Moxley has found success in AEW while Young, now going by her real name of Renee Paquette, just announced the launch of her new podcast.

You can hear Moxley’s announcement in his promo below:

A fight is a fight and when it comes down to it – Jon Moxley is ready to fight tooth & nail for his AEW World Championship.

Watch #AEWDynamite NOW on @tntdrama or https://t.co/GdI7QAsxEP for our Intl fans. pic.twitter.com/QIj6yBjgPo

Jon Moxley cut a backstage promo during this week’s AEW Dynamite where he reflected on his upcoming AEW World Championship defense on Dec. 2 against Kenny Omega.

But in the middle of his promo, Moxley dropped a bombshell, revealing that his wife and former WWE personality Renee Paquette (fka Renee Young) is pregnant with their first child.

Dude you guys finally announced it 😩 I’m so happy for @ReneePaquette and @JonMoxley on their baby AHHHH!!! They’re gonna be such great parents 🥺🥺🥺❤️❤️ pic.twitter.com/pE9VTGyO1Y

As of now Paquette still hasn’t commented publicly on the news. The pair first started dating in 2013, then married in 2017.

Paquette left WWE following the SummerSlam pay-per-view back in August, later explaining that she felt there wasn’t much left for her to do after spending eight years with the company.