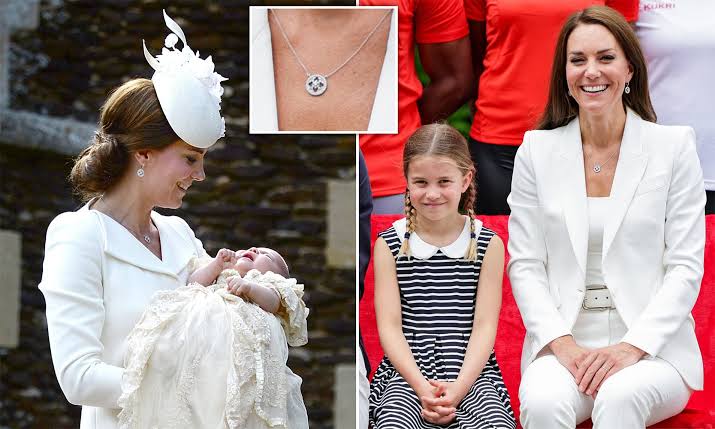 Kate Middleton paid a touching tribute to her daughter Princess Charlotte yesterday as she donned jewels first worn at her christening to mark the little royal’s first solo appearance with her parents. The little royal, seven, made a surprise appearance when she joined the Duke and Duchess of Cambridge, 40, for a visit to the Commonwealth Games in Birmingham.

The occasion marked the first time the little Princess has joined her parents for a solo outing without one of her brothers, Prince George, eight, and Prince Louis, four. Kate appeared to make a sentimental nod to the significance of the occasion, opting to wear a set of jewels she first wore for Princess Charlotte’s christening in 2015.

Since she first wore the jewels for Princess Charlotte’s christening, the pieces have become a favourite for the Duchess. At the time, she opted to sweep her hair into a bun to reveal the pieces in their full glittering glory.However yesterday she wore her long locks in her usual bouncy blow dry style.The mother-of-three appeared trendy in her £1,945 white Alexander McQueen trouser suit for the event, which she first wore during the Caribbean tour earlier this year.

Meanwhile Charlotte was wearing a £39 Rachel Riley dress with her hair tucked into tidy plaits. The seven-year-old was on her very best behaviour as she joined her parents for her first royal engagement without her brothers George, nine, and Louis, four.

The little princess shook hands with dignitaries, smiled for photographs, and cheered on the athletes, all under the watchful eye of her parents.When the long day out started to get to much, Princess Charlotte began to get a little restless. But her doting father Prince William was on hand to reassure her with cuddles and small acts of affection, like tucking her hair behind her ears.

The sweet moments between father and daughter were noted by royal fans who praised their genuine bond.One tweeted: ‘He is a wonderful dad. Another posted: ‘Love this natural interaction of Papa and daughter.’ A third added: ‘Sweetheart Charlotte loves her papa William.’

The day started with a visit to the Sandwell Aquatics Centre where the Cambridges joined Prince Edward, the Countess of Wessex and their children Lady Louise Windsor, 18, and James, Viscount Severn, 14, to cheer on athletes in a number of swimming heats.

Charlotte put on an animated display, giving her father a thumbs up, pulling funny faces, and even sticking her tongue out and she soaked up the atmosphere.After the outing to the Aquatics Centre, the Duke and Duchess of Cambridge paid a visit to a programme supporting young athletes. Princess Charlotte was photographed on her best behaviour, shaking hands with Tim Lawler, CEO of SportsAid.

Elsewhere the young princess revealed gymnastics was the sport she liked most and joined a nutritional workshop helping her parents place pictures of foods such as nuts, bread and grapes into the right groups, whether protein, carbohydrates, antioxidants or healthy fats.