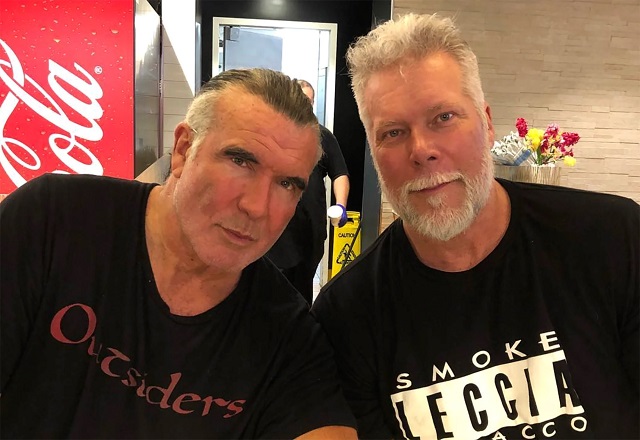 The 63-year-old Hall of Famer – who made his name as Razor Ramon in the then-WWF – suffered three heart attacks on Saturday night following complications from hip replacement surgery, and now his close friend and nWo teammate has given a heartbreaking update on social media.

Sharing a picture of them together on Instagram, Nash wrote: ‘Scott’s on life support. Once his family is in place they will discontinue life support. ‘I’m going to lose the one person on this planet I’ve spent more of my life with than anyone else. My heart is broken and I’m so very f***ing sad.

‘I love Scott with all my heart but now I have to prepare my life without him in the present. I’ve been blessed to have a friend that took me at face value and I him.’ Hall underwent hip replacement surgery last week, but he then suffered a serious complication after a blood clot got loose, and has been fighting for his life.

Nash – who left the then-WWF with Hall and made the jump to rival company World Championship Wrestling (WCW) in 1996 – reflected on the bond they shared. He continued: ‘When we jumped to WCW we didn’t care who liked or hated us. We had each other and with the smooth Barry Bloom we changed wrestling both in content and pay for those…… alot that disliked us. We were the “Outsiders ” but we had each other. (sic)’

He admitted Hall – who had been very candid about his struggle with addiction – didn’t see himself as ‘worthy of the afterlife’, but Nash has asked God to accept him. ‘Scott always felt he wasn’t worthy of the afterlife. Well God please have some gold plated toothpicks for my brother,’ he added. ‘My life was enriched with his take on life.

He wasn’t perfect but as he always said “The last perfect person to walk the planet they nailed to a cross “ ‘As we prepare for life without him just remember there goes a great guy you ain’t going to see another one like him again. See Ya down the road Scott. I couldn’t love a human being any more than I do you (sic)’

Hall is held in high regard as one of wrestling’s most influential stars in the 1990s, starting with his days as Razor Ramon before finding huge success as a member of the New World Order (nWo) when he and Nash jumped to WCW.