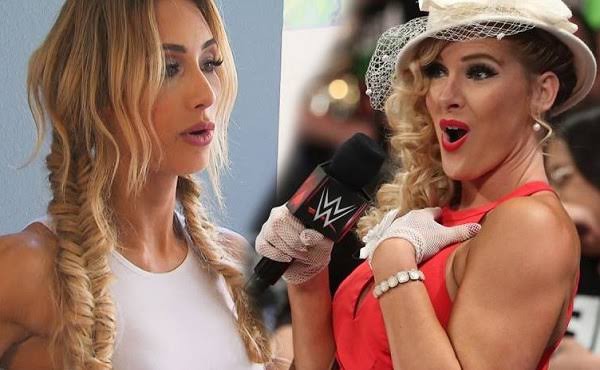 WWE wrestler Carmella, whose real name is Leah Van Dale, returned to Total Divas with a bang in Season 10 after taking a hiatus from the E! reality series last year.

Few days ago, the 31-year-old WWE wrestler Carmella faced a wave of backlash after the estranged wife of her boyfriend, wrestling commentator Corey Graves, publicly accused the duo of having an affair.

It was later confirmed that the spouses had already separated and were in the process of getting a divorce when Corey (born Matthew Polinsky) began seeing Carmella — but the controversy took a toll on the couple.

“Why the f–k would [Corey’s wife] go on social media and put that out there?” Carmella lamented on camera. “I’m not kidding. This is not OK. I’m not OK right now. Literally, I’m getting death threats.” Was the pair’s relationship able to weather the storm?

Eight months after the scandal, the entertainers are still an item. After being forced to relive a dark period in their personal lives, the duo happily gushed about each other on social media.

“You are my home and adventure all at once,” Carmella captioned a photo of the twosome in Las Vegas. Next to his own pic of the pair, Corey commented, “‘My head keeps spinnin’…'” He also clapped back at haters, writing, “F&$@ a false narrative. What’s real is real.”

In February, Amy Polinksy claimed the 35-year-old was cheating on her with Carmella. “This may be totally below me to do but I’m hurt. I’m sad. I’ve put 11 years into supporting a man to accomplish his dream only for him to punch me in the gut!” she allegedly wrote.

“The kicker is finding out that he’s been sleeping with one of my daughters’ role models all [along]. Carmella and Corey Graves, I hope you guys are happy. I really do!”

It didn’t take long for Corey to deny his ex’s allegations. “The story that was making the rounds was not accurate,” he explained in an interview. “It was made out of anger and emotion and it wasn’t what it looked like. I had been out of the house and living on my own for quite some time before that whole situation.”

He added that both sides had since apologized to each other. “The storm is over,” he continued. “And everyone has moved on and it has been for the best.”

In a separate interview, Carmella asserted that she has no interest in being a homewrecker. “That is not the life I’m about. Never in a million years would I do that,” she said on The Bellas Podcast. “I don’t care how hot the guy [is] or how in love I think I am, that absolutely did not happen.”

Corey Graves and his ex stayed married for the sake of their kids.

Earlier this year, the father of three admitted that he and Amy should have split up a while ago. “My wife and I had both agreed that because of having the kids it became the reason why we had stuck around longer than we should have,” he revealed.

Despite their major lifestyle change, Corey said his son and two daughters were adjusting well. “My kids, especially my oldest, had told me, ‘Dad, the amount of time we get to spend with you now is more quality time,'” he shared. “I think it allows me to be a much better father and dad than before.”

Watch Carmella and Corey’s relationship unfold on new episodes of Total Divas as the ‘Total Divas’ Star Carmella wants to make one thing clear: She’s Not a Homewrecker!