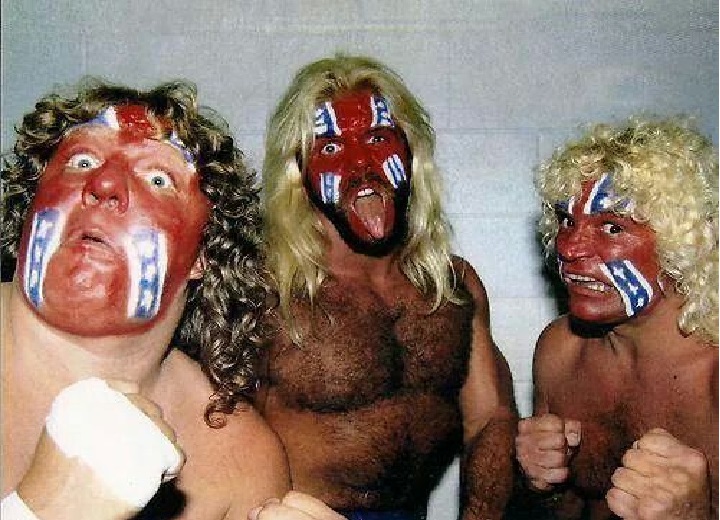 The Fabulous Freebirds were inducted into the 2016 WWE Hall Of Fame, although much like their original run it has not come without controversy.

Some WWE fans are questioning why The Freebirds should be inducted given they embraced the Confederate flag in the 80’s.

It’s certainly not a politically correct thing do in 2016, given the symbolism and deep racial history behind it, so Michael PS Hayes, one of the Fabulous Freebirds took to Ric Flair’s podcast to address the Confederate flag issue and its origin for the group:

“When we came to Texas, the Von Erichs would proudly take a flag from a fan in the audience and it’d be a Texas flag…And being the nemesis in the storyline, we started taking the Georgia flag, which had the Rebel flag in it; which I always thought — just from a flag perspective — was a gorgeous flag.

We started making our clothes out of the Rebel flags because, hello, we’re rebellious. It never had anything to do with being racist.

People, said ‘well, they painted their faces like the Rebel flag.’ Well, if you look at history, the first and only time we ever started painting our faces was when we were going against the Road Warriors — who painted their faces and were notoriously known for being from the north.”

… “People read so much into that, but I get it. Some stupid idiot in South Carolina did a reprehensible, despicable act.

And good thing I wasn’t in charge because he would have never gone to court. We would have shot him.