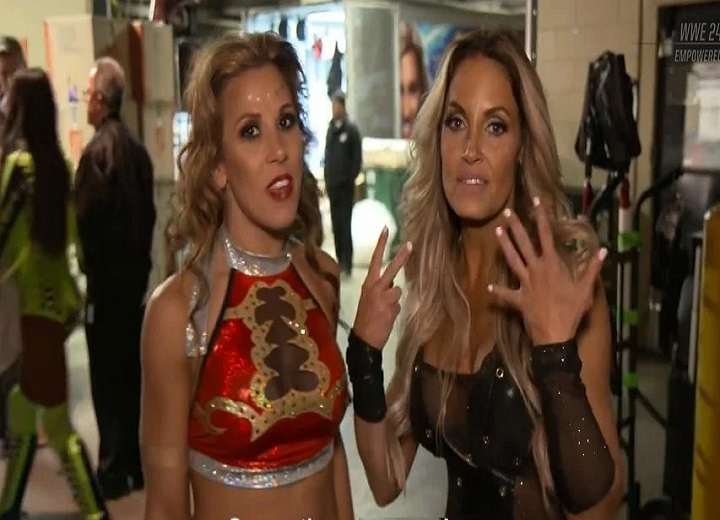 It’s fair to say Mickie James is one of the most important women in WWE history, especially given her ability to work with two different generations of talent.

The six-time world champion was a high profile star in WWE when the women were still participating in pillow fights and bra and panties matches, but she has also had bad ass matches with some of the pioneers of the women’s revolution.

Still, in the inaugural women’s Royal Rumble back in 2018, arguably the biggest reaction in the match came when early 2000s stalwarts James and Trish Stratus came together.

These two had a generational feud that helped launched James as a legitimate star in WWE and the fans sure remembered.

When speaking to talkSPORT, James revealed that the moment wasn’t originally in the plans. She and Stratus had to fight to make it happen.

“We weren’t originally supposed to be in the Royal Rumble at the same time,” James explained. “We just went to them and said ‘I think we’re missing out on a really key moment.’ Obviously there are current storylines that are happening now [to consider].

“This is just perhaps how far women’s wrestling has come since then, but those key building moments with Beth [Phoenix], Layla, Michelle McCool with that whole piggy James thing, those emotional rollercoasters – those examples are just in my career – but there are women that have paved the way since then.

“We sometimes forget about some of that stuff just because it’s taken us so long to get here. And how special those moments were for us as a fans and the history in that sense.

“You could see the genuine smiles coming across our faces. We were just like ‘Yes! We were good! We are good!’ [laughs], Trish Stratus and I still have “unfinished” business at Royal Rumble and that moment would come soon enough,” James said.

James first returned to WWE to face Asuka at NXT TakeOver in late 2016.

From there, WWE would make a pitch to bring James back full-time, but the 41 year old revealed she had tried returning to WWE sooner and hadn’t gotten anywhere.

“It was out of nowhere, honestly. It was so random,” James said of the call to return to WWE.