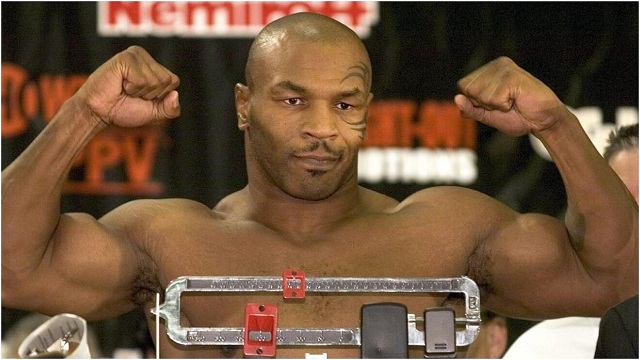 He may be 55-years-old but the former heavyweight champion of the world looks in great condition. In fact, ahead of his showdown with Roy Jones Jr, the ‘baddest man on the planet’ was arguably in the shape of his life.

Plenty of footage from Tyson’s intense training camp emerged on social media ahead of his return to the ring but one clip has only recently been published online.

As you can see in the footage below, Mike almost knocks out his trainer with a clubbing blow.
As mentioned earlier, Tyson got himself in phenomenal shape for his eagerly-anticipated boxing comeback against Jones Jr and, even though he didn’t earn the win, the 55-year-old delivered a solid performance against a younger fighter

Jones Jr, who last competed just two years ago, looked visibly tired in the later rounds while Tyson fought at a steady pace throughout the eight round bout.

The former world champion showed off his head movement and produced some of those trademark shots during the entertaining draw in Los Angeles.

Speaking after the result, he said: “Sometimes that two minutes felt like three minutes. I’m just happy I got this under my belt and I’m going to continue to go further and do more, absolutely.

“This is bigger than fighting and winning a championship. We’re humanitarians, we’re helping people.

So what next for Iron Mike? Tyson’s coach has recently revealed we will see the former WBA, WBC and IBF world heavyweight champion in action soon.

“We continue training,” Rafael Cordeiro told MMA Fighting. “He’s an athlete and is always training, hitting pads here in the gym. I think we’re going to have something in September.

“I don’t know who because his company Legends Only League is working on it and negotiating a TV deal so they can announce a schedule, but we’re training. We’ll be fighting in September.”