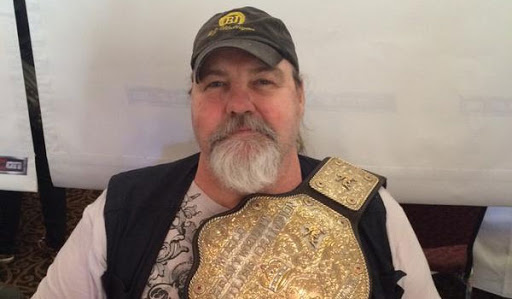 No more information has been provided at this time on his condition.

This is the second former WWE employee to suffer a health problem in as many days.

This is another bit of sad news for the wrestling world. Barry Windham is a beloved legend in the business.

(Damn, Barry Windham looks more and more like his dad every time I see him).

Barry Windham competed in CWF, NWA and WCW, and later returned to the WWE after an over 10-year hiatus.

Of course I want Windham to make a speedy recovery. My biggest concern, though, is how old this is making me feel.

It was one thing when 35-year-old wrestlers were dying when I was 19. But now the older, somehow healthier generation (Windham, the Briscos, etc.) are starting to sell the farm, guys I grew up watching when I was 4, 5, 6 years old.

I remember renting WrestleMania 1 on VHS and being wowed by someone the size of Windham throwing such a mean dropkick, and then, three years and 10 pounds later, turning heel on Lex Luger and joining the Four Horsemen.

Well, one year and another 20 pounds after that, Windham jumped back to the WWF, where he became a jobber known as “The Widowmaker.” Ugh.

That was almost as bad as “The Stalker,” the 1996 WWF character played by an approximately 400-pound Windham…

Wait, he had a stroke? No way.

Anyway, here’s to a speedy recovery to a wrestler of which I have plenty of fond memories and a shared weight fluctuation problem. Time to drown my sorrows in a bucket of Blue Bunny moose tracks. -Eric

I would like to send my well wishes to Barry Windham and his family. I hope your road to recovery is easy and you live a long and healthy life.

WWE Hall of Famer and former NWA World Heavyweight Champion Barry Windham was a recent guest on The Hannibal TV to discuss a variety of topics. Windham was asked if he follows the Impact Wrestling brand.

He stated that he “did [follow] some, but then it just got so erratic that it was hard to follow. So I just quit watching it.”

He also believes that Vince McMahon will eventually purchase Impact Wrestling for their tape library, and it will most likely happen “in the next year or two.”

Regarding McMahon relaunching the XFL in 2020, Windham said that it is “his money,” and “he’s the boss.”

However, he added, “I’m sure it has to do with the way the players have been not standing for the anthem and stuff like that.

Which, he would make sure that kind of stuff didn’t happen. But, I don’t see it being successful.”

Windham also feels that the XFL will not be any more successful in the Arena Football League, and he does not see it “being a money maker” for McMahon.

After having a very successful career competing for CWF, NWA and WCW, Windham returned to the WWE after an over 10-year hiatus. Windham competed for WWE in the mid-1980s, teaming with Mike Rotunda as the U.S. Express and becoming two-time WWE Tag Team Champions.

He then made his WWE comeback in 1996 as The Stalker, and eventually teamed up with Justin “Hawk” Bradshaw as The New Blackjacks, but his overall stint was not very successful. As a member of the Four Horsemen, Windham was inducted into the WWE Hall of Fame in 2012.