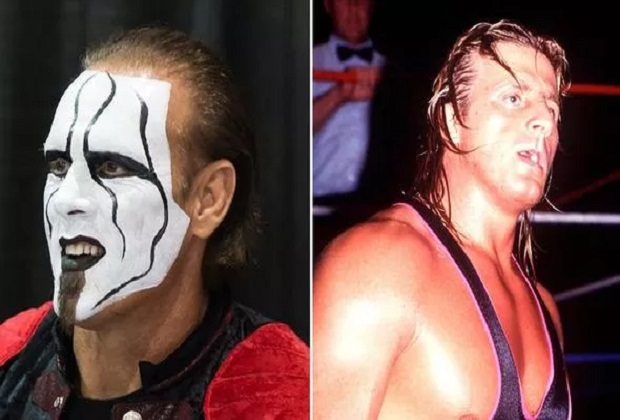 WWE Hall of Famer Sting revealed he almost suffered the same tragic death as wrestling legend Owen Hart during his glory days in WCW. But the WWE legend suffered a horrible accident at Over the Edge 1999 while performing the perilous entrance as he fell from 78 feet (24m) and died at the age of 34.

The Stinger rose to professional wrestling superstardom in 1987 but his best years took place in WCW during the late 1990s when he adopted a demonic and sinister character that saw him wrestling in dark attire and intimidating face paint.

Part of his gimmick saw him descending from the rafters with a long chord tied on him in every show to make him look more powerful and ominous like the lead character of the iconic movie The Crow.

The Icon wasn’t the only one who adopted that dangerous stunt as Hart did the same thing in 1998 when he wrestled under the super hero gimmick of The Blue Blazer.

But the WWE legend suffered a horrible accident at Over the Edge 1999 while performing the perilous entrance as he fell from 78 feet (24m) and died at the age of 34.

According to Ringside News, Sting revealed during Starrcast that the same thing almost happened to him one night at the United Center in Chicago and claimed that he descended from a much bigger height.

The seven-time world champion said: “There’s a lot of stories and some of them I could never tell but Owen, we could not forget Owen.

“How appropriate, you guys were acknowledging him.

“I could tell you some stories.

“Honestly, there was one night in particular in Chicago at the United Center when I had near death experience similar to the tragic Owen Hart accident”

.“We were “this far” from that very thing happening.

“That was a football field high.”

This is a pretty scary story to hear even if it happened a more than two decades ago.

It is a good thing that they were able to fix this mistake so Sting didn’t fall all the way to the ground like Owen Hart unfortunately did as he plummeted to the ring. However, it would be even better if Owen Hart’s life and career wasn’t tragically cut short in the first place.

Hart is still remembered as one of the greatest legends in professional wrestling history as he was a two-time Intercontinental Champion, a former European Champion and the 1994 King of the Ring.

Hart was an amazing in-ring competitor who had some unforgettable matches against the likes of Stone Cold Steve Austin, The British Bulldog and his brother Bret Hart.