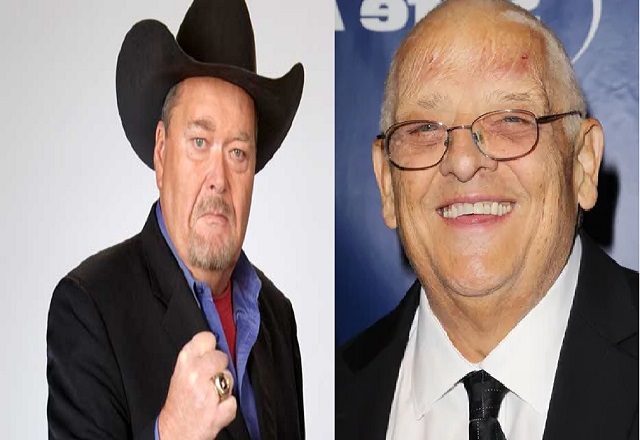 In a recent interview with Busted Open, WWE Hall of Famer Jim Ross talked about the death of Dusty Rhodes, his first reaction, his last memory of Dusty & Dusty’s wrestling career & more. Below are the highlights:

His first reaction to the passing of Dusty Rhodes:
“I choose to celebrate his life rather than to mourn his death. I knew for several weeks that there was something wrong and of course Dusty would never admit it.

I compared him to John Wayne in his last movie – he knew that something was wrong, but he didn’t want to talk about it, and he wanted to go out on his terms, and his style and that’s what happened, and as quickly and as suddenly he was taken from us.

I was up pretty much all night, and I just decided that as the day has gone on that I choose to celebrate his life, my fun that I had with him, the confidence he put in me. When Bill Watts sold Jim Crockett promotions, Dusty put great confidence in me to get the storylines over on NWA Pro and UWF.

He kind of indirectly got a little heat on me because he said to some guys that I announced a match, I think it was Dr. Death vs Big Bubba Rogers he said that was an announcing clinic to all the announcers that worked for us and they should listen to this match.

It didn’t do him any favors – but all it did was give me great confidence that my work was OK and Dusty facilitated my break to get on TBS and begin some somewhat relevance on national cable. I’ll always owe him for that. I’ll never owe him that $100 that I lost on the game of horse that we played at 3 in the morning after drinking beer all night because I paid my debt…

But I just choose to remember him as the human being that he was and the great times that we had, and not the man that had lost all that weight and you could see him virtually vanishing before our very eyes.

Dusty’s chemistry with the fans:

He was a 300lb baby-face that was so good at the dramatic art of selling that he could make people care. And sometimes, and often times, vs a villain that was much smaller and that was a tremendous art form to be able to pull that off.

There are more people walking around that look like The Dream than look like a super hero with big muscles and a body builder’s physique.”

Dusty’s mind for the business:

“The great thing about Dream was that he was a fan as a kid. He watched wrestling and territories in Austin as a child and he became a huge fan. There was a special hour each week that was destination TV for him.

He was an excellent athlete. He was probably a better baseball player than he was a wrestler or a football player – he was very good at both those.

The innovations as far as War Games and the stars that he made…Nikita Koloff by all intents and purposes never really had any right at the time to be the superstar that he was … but he was a creation, his image, his persona was a creation of Dusty Rhodes… and how Dusty was able to create around the tragedy that Magnum T.A. was involved in.

People want to look at glass half full too often. Dusty had a brilliant booking mind… much much longer than people like to give him credit for. He had great teachers. Bill Watts made him do the angle to turn him baby face in Florida. Gary Hart needs some credit for that. He also got his PHD under Eddie Graham.

I will go to my grave and say, when motivated, and when used in the right way, the Texas Outlaws of Murdoch and Rhodes were as good a tag team as I have seen. They don’t get the credit other teams get but when you look at them or watch them on YouTube or something, they were absolutely incredible… the things that they could do in that era. Creative genius. War Games, I loved. How he built to the big match … the destination match.

Which is lacking in the business today because there are so many quote on quote big matches … the destination match that he did, the tours, the big events, the Starrcades, things like that … Clash of Champions. He gave me my break, he wanted me on the Clash of Champions team.

Tony Schiavone and I we called that first clash. Big break for me on free TV – prime time on TBS against WrestleMania – big opportunity that both Tony and I seized – neither of us were heels but he broke that tradition.

He didn’t want a 3 man booth he wanted the two of us out there and we were able to be a part of a history making event as far as TBS and WCW was concerned and that was because of The Dream and his vision.

He had great visions and I will never be able to thank him enough. His birthday is October 12th, same day as my wedding anniversary… and many October 12ths, while my wife was sleeping in, he got the birthday call… almost every year.

It is also the same weekend that Oklahoma plays Texas and we would argue about Oklahoma and Texas all year – that was our thing.

And when people would say “gosh its only football season guys” and we would both look at them and say “mind your own business… this is our argument… this is what we love to talk about”… and we did. We shared our love of BBQ and we shared our love of John Wayne. We have much more in common than people will ever know.

He did much more for me than people will ever know. When he would go into his diatribes and using all the Southern South-Western colloquialisms to describe what he wanted in a match… I got it. I was raised in it.

I understood it. So he trusted me to get his angles over and the talent that he was pushing over. He gave me that trust and gave me a chance to go on a national stage to do what I did for so many years.

He is certainly going to be missed and yes I mourned but I just choose to celebrate the man that I knew, and that I loved, and that taught me so much, and was a great mentor for me, and a great supporter of my work and I think that’s the healthy way of looking at Dusty.

He would rather us laugh at his humor, his dancing, his “Funky Like a Monkey” – he heard him talk one time and you never forget it. He loved that. And we talked probably every couple of weeks.

I sat behind him at the Hall of Fame… I saw how hard it was for him getting up. He had some issues with his legs… I don’t know what it was. He had a hard time keeping his balance.

He had a hard time getting up and down. I still don’t know what the cause of death was. And does it really matter except that there is another TMZ news story? He’s gone, but his memory will never be forgotten.”

His lasting memory of Dusty Rhodes:

“The last match that he and I called together was William Regel vs Dean Ambrose in FCW in Tampa a couple of years ago. And we approached that just like a Clash of Champions, and we were so fired up to go out and call that match.

And when it was over, we both realized that we were both too Southern to probably ever work again on a National basis. We knew that the handwriting was on the wall but it didn’t scare us and it didn’t bother us. We got to go do that last one.

We had a lot of fun and some of my best work… and people can go back and listen and be selective… the Dusty Rhodes /JR combination of where I followed him along on these storytelling journeys that he booked, and he did color on were some of the most fun times I ever had in broadcasting.

Some of the things we said to each other, and he said and words he would invent were just absolutely hilarious, and I owe him a lot and I will never be able to repay him but some day our paths will cross again.”

Jim Ross Says Dusty Rhodes Went Out On His Own Terms