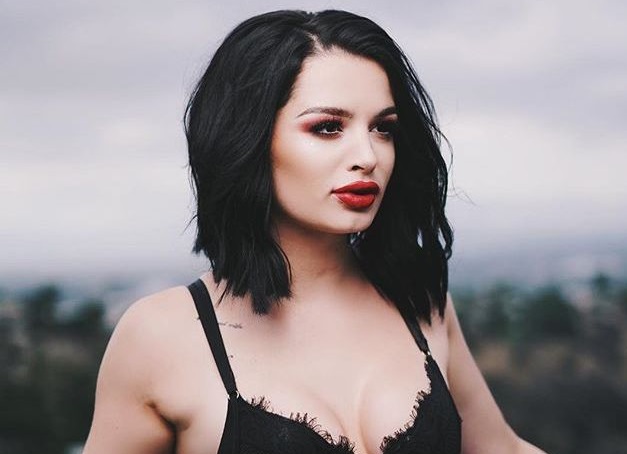 Who is WWE Star Paige Dating? Who is Paige now is relationship with? Here’s Everything you need to know about the WWE star (Paige), her relationships, love life and current boyfriend.

Former WWE professional wrestler Paige has opened up about the negative impact a sex tape leak had on her mental health, explaining that she underwent therapy and suffered from “stress-induced anorexia”.

In 2017, Paige, whose real name is Saraya-Jade Bevis, was the victim of a highly-publicised leak of private photographs and videos.

The leak, combined with a work-sustained injury, led to the Norwich-raised wrestling personality experiencing depression and taking time off work.

In February she hit the headlines in recent weeks ahead of the release of her biopic, Fighting with My Family.

The film saw actor Florence Pugh star as the Norwich-born wrestler on her journey to try out for the WWE in 2011.

On 14 February, Paige, real name Saraya-Jade Bevis, teased that a spin-off reality television show about her life might also be in the pipeline.

When a fan suggested she star in her own show on Twitter, Paige replied “I think I should have my own”, along with a winking face emoji.

The teaser came days after the former athlete opened up about feeling “publicly humiliated” when a sex tape was released without her consent in 2017.

“To be publicly humiliated like that was terrible, and I don’t wish that for anyone,” Paige told The New York Post.

In the lead up to the film’s release, here is everything you need to know about Paige:

Paige was born 17 August 1992 in Norwich, Norfolk. The daughter of professional wrestlers Ian Bevis and Julia Hamer-Bevis, the athlete developed a keen interest in the sport as a teenager and began attending wrestling training boot camps run by her father.

Despite her amateur wrestling beginning, Paige went onto sign a contract with the WWE in 2011.

The wrestler and her family were also the subject of a UK Channel 4 documentary The Wrestlers: Fighting With My Family when Paige was just 13. The programme chronicled the teenager’s home life with her wrestling-obsessed family and burgeoning wrestling career over a year.

In 2012, the athlete adopted the stage name Paige.

Paige Saraya Bevis selling herself at all opportunity

In 2014, she joined the WWE’s main roster of wrestlers and became the youngest ever champion of the women’s professional wrestling tournament, the WWE Divas Championship. In addition, she became the only woman to hold both Divas and NXT Women’s Championships at the same time.

Speaking to The Independent following her win she said: “I’ve been working my whole career to get to this point, it’s been nearly nine years now, and it was just incredible.

“I couldn’t stop crying, I haven’t stopped talking to my family about it, it’s overwhelming especially getting so much support from the fans and backstage. It’s been magical.”

Following a string of fights with fellow female wrestlers including Divas champion Nikki Bella and NXT Women’s Champion Sasha Banks over the years, the wrester was issued an immediate 60-day suspension for a second violation of the WWE’s wrestling company’s anti-drug Talent Wellness Programme in October 2016. Her first suspension came on 17 August.

The same year, Paige underwent surgery to repair a herniated disc in her neck and returned to in-ring competitions in 2017. However, during her first match since June 2016, the wrestler experienced yet another injury and was forced to announce her retirement from in-ring fighting.

The two-time WWE Divas Champion announced the news in April 2018 on RAW After Mania in an emotional speech.

“Unfortunately due to neck injuries I can no longer perform as an in-ring competitor,” she told spectators.

“This is one of the hardest things I’ll ever have to say in my entire career.”

Months before her retirement, Paige announced she had launched an clothing line store titled Saraya, which sells a selection of women’s fashion including shirts, hats and hoodies. She opened a store in Anaheim, California a year later.

Less than 12 months passed before the wrestler-turned entrepreneur announced she had partnered with cosmetics brand Beauty Society to launch a cruelty-free, vegan cosmetics line which features lipsticks and eyeshadow palettes.

“This is going to be absolutely huge,” Paige announced to her 61.16k followers in an Instagram video on her brand’s account.

Rumours of a comeback

Last year, there was talk on social media among wrestling fans that former athlete might be considering a return to the sport.

However, Paige quashed rumours on Twitter in November 2018, posting: “Nope. I’m not. At all. One more knock to my neck could result in paralysis. Don’t read “facts” on the internet. As much as I want that to be true it’s 100% not.”

Paige is kind of a bad girl at heart
always looking for a bad boy it seems. She had a pretty public relationship with Alberto El Patron, but that didn’t end well. In fact, Patron is still taking shots at Paige and her family when he wants to.

The first-ever NXT Women’s Champion was dating rocker and Attila bassist Kalan Blehm. However, those two have not been seen together in quite some time.

Now it appears that Paige is in a relationship with a new rockstar. Paige is now dating Ronnie Radke who is famous from many ventures including the bands Falling In Reverse and Escape The Fate.

The two were at the recent UFC event where Paige had some controversy with a fan. Ronnie was very pumped to see Jon Jones though.

As we noted, former SmackDown Live General Manager Paige broke up with her boyfriend Kalan Blehm.

During an appearance on Lilian Garcia’s Chasing Glory podcast, WWE interviewer Charly Caruso revealed that Paige is single once again and how it can be difficult for successful women to maintain relationships because men can get insecure.

Below is what Charly said:

The other day I was speaking to someone in the company… oh, it was with Paige because she just broke up with her boyfriend somewhat recently.

I told her, ‘You know every guy says they want this strong confident woman and that’s what they love about you and it’s only a matter of time in a lot of situations where then they start resenting you for that and they can’t keep up with you or they don’t like that you’re so dominant or you know so successful because it makes them feel less secure’.”

Congratulations to the happy couple. We’re rooting for you.