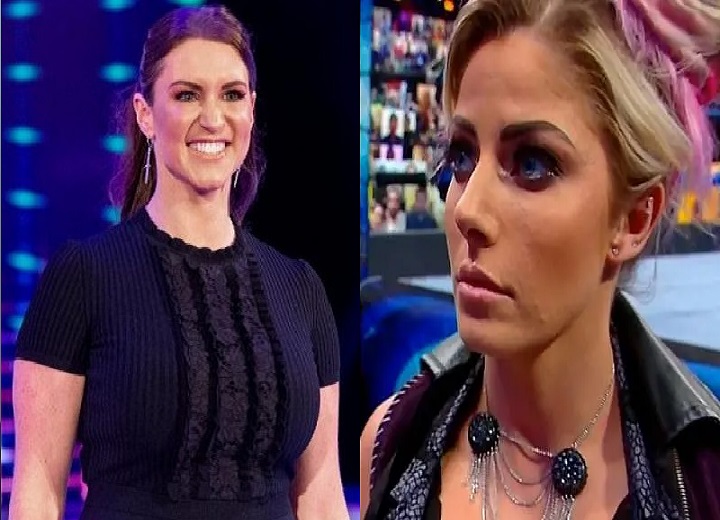 Alexa Bliss explains why she missed Last week’s RAW: Alexa Bliss hasn’t been on WWE television for a couple of weeks. She was off filming an episode of Punky Brewster with Charlotte Flair, but now she’s taking it easy.

Bliss posted on Instagram to let fans know that she’s enjoying the quarantine life with her new fiancé. One fan asked Bliss where she’s been, Bliss replied saying: “vacay! Booked the time off months ago.”

The caption of her post let everyone in on what’s going on.

That cuddle quarantine life! Binge watching our favorite shows, we recently got TiVo & we are literally obsessed! I used the code “Regina phalange” for a discount. What shows do you like to watch during quarantine?? Comment below!

Bray Wyatt did not get vacation right now. He’s booked to be at TLC this Sunday in a Firefly Inferno Match. That could bring Bliss back on December 20th. She seems to be enjoying the vacation she can get.

Stephanie McMahon celebrated her 44th Birthday on September 24th, and the Chief Brand of Officer of the WWE received several congratulatory messages from members of the WWE family.

Stephanie McMahon put out a tweet and revealed her noble birthday wish.

My birthday wish is for as many people as possible to join @WWE & @TheVFoundation’s @ConnorsCure Superstar Challenge! Grab your sneakers, a friend & get moving to raise money in the fight against pediatric cancer.

Happiest of birthdays to Momma Steph ♥️ @StephMcMahon hope it’s as amazing as you are.

Vince McMahon, as expected, issued a heartfelt message for her daughter on Twitter, which you can see below:

We’ve compiled all the birthday wishes sent to Stephanie McMahon below:

I can watch her slap people all day 😍 happy birthday Steph ❤️

When @StephMcMahon and I take a picture but @itsBayleyWWE crashes the party!😈 Happy Birthday, Steph! Thanks for being the best role model💜 (no offense Bayley…🤨) pic.twitter.com/om43gBsclK

Happy birthday to the queen and boss lady @StephMcMahon 🥰 pic.twitter.com/1zyqhpb8Bx

It’s interesting to note that Stephanie McMahon’s husband, Triple H, is released a powerful tweet wishing his beloved wife a happy birthday… on the auspicious day.